The Berlin Boxing Club (YA) 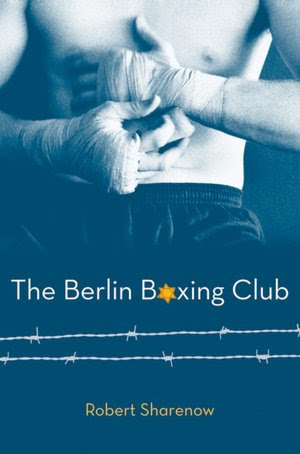 As Herr Boch finished the last lecture of the school year, I sketched one final caricature of him into the margins of my notebook.

The Berlin Boxing Club is set in Berlin during the mid-to-late 1930s. The hero of the novel is a young Jewish boy, Karl Stern. When readers first meet Karl, he does not even identify himself as being Jewish. It's not that he's trying to hide the fact from his peers, acting one way at home, another way in public. He just does not see himself as being ethnically or religiously Jewish. His sister and father look Jewish--though Karl still argues that they don't particularly act stereotypically Jewish--so it's a shock to him that he's forced to wear this Jewish identity. And being Jewish in Nazi Germany, well, it's nothing anyone wants to be. The new laws being so strict, so harsh. (Karl ends up being kicked out of school, getting beat up by bullies, etc. And that's just the start of it, but I won't go much beyond that in this review.)

Karl also does NOT see himself as athletic. He does NOT see himself as a fighter. But when his father's friend, Max Schmeling, offers to train him, offers him a membership at the Berlin Boxing Club, well, Karl finds himself wanting/needing this. His father would have preferred that Max pay money for the painting he bought at his gallery, but this does seem to be a once-in-a-lifetime opportunity. So Karl has to do a great deal of training to get himself in shape before he even steps into the boxing club, Max gave him a list of exercises, a training regimen. Will Karl have the stamina and motivation to continue, to live up to his potential....

So The Berlin Boxing Club is about so much more than boxing. It is even much more than just a novel about "the fights" between Joe Louis and Max Schmeling. It is a book about fighting to survive in desperate times. It is about how difficult it was to be Jewish in Nazi Germany. It's a thought-provoking read, very emotional, very compelling!

Fine blog - inspiring posts. Always looking for a good read, and finding there is great YA stuff out there

Actually, I've always shied away from anything set in Nazi Germany because of the inhumanity of that time period. I'm an emotional reader and certain things really break me. This sounds good, especially if it is an insight to the Jewish lifestyle.

I started reading this book, but ended up skimming it. I think the plot was great, but was so put off to all the references to woman's body and other ideas that are thought acceptable in today's young adult books. I would never put this book into my teenage son's hand to read and that is too bad, because it would have been a wonderful opportunity to learn more about Nazi Germany and the many people who stood up for right in a world gone so wrong.