The Girl of Fire and Thorns (YA) 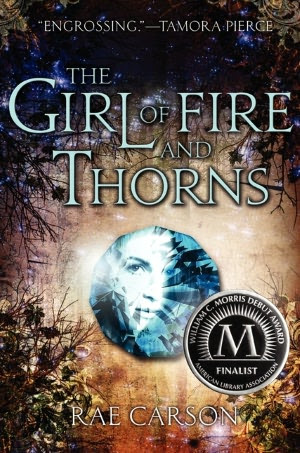 Prayer candles flicker in my bedroom. The Scriptura Sancta lies discarded, pages crumpled, on my bed. Bruises mark by knees from kneeling on the tiles, and the Godstone in my navel throbs. I have been praying--no, begging--that King Alejandro de Vega, my future husband, will be ugly and old and fat. Today is the day of my wedding. It is also my sixteenth birthday.

The Girl of Fire and Thorns was nothing like I expected. I read the first few chapters and imagined it heading in one direction. I didn't expect it to go oh-so-differently than how I imagined it. And yet, I can't say that those differences kept me from enjoying this novel. Not really.

Elisa is a princess, the second princess. But she's been Chosen, chosen almost since birth. For she bears the godstone in her navel. And chosen ones only appear every four hundred years or so. So she's special. But her being special makes her all that much more vulnerable. For it seems that there are oh-so-many ways to view the godstone. Yes, some react with reverence and respect, devotion and loyalty. But not all. There are some who would kill her for the stone in her navel. Some who would see her as expendable, her only worth being the stone itself. So while her 'chosen' status is known in some circles, in others it's a very closely kept secret.

So. The novel opens with Elisa preparing for her marriage. She's nervous for many reasons. She'll be marrying a stranger, a King, a king with a young son, a king that may or may not be over the loss of his first wife, a king that may or may not ever care for her, a king whose character is completely unknown to her. She's nervous about the impression she'll make on him her future husband. She's definitely on the plump side, and she feels her wedding dress makes her look like an over-stuffed sausage. She sees rolls and rolls of fat and worries that that is all he'll see too. She worries that he'll never look at her with respect, with friendship, or love. So part of her hopes that she won't be attracted to him. She hopes that she won't want a real marriage.

But the King is anything but ugly or fat or old. He makes quite a first impression on her. Not that it's love at first sight. It isn't. It really isn't. But he's kind and gentle. And he seems to see her. Enough that readers feel there is potential. That there is a spark of something that will work in the heroine's favor...

So their journey together begins soon after the marriage. The trip to his kingdom is NOT easy. In fact, it clarifies things for readers. Rae Carson is NOT afraid to kill off characters.

They arrive...and she learns that her marriage is to be kept secret...indefinitely. Once they arrive, she barely sees her new husband...at all. And that small spark of potential seems to vanish completely. But her new life isn't horribly lonely. Not really. But before she can adapt to her new role, a role that has her merely as visiting princess, she's kidnapped...and EVERYTHING changes...Elisa most of all. She goes from a shy and uncertain oh-so-vulnerable heroine who doubts that she'll ever live up to being 'the chosen one' to being someone who's incredibly fierce and resourceful and stronger than she ever imagined herself being...

Read The Girl of Fire and Thorns

Amber at The Musings of ALMYBNENR said...

Great review. I'm sorry you didn't love it as much as I did, but I'm glad there were things you loved and liked.

Excellent review for The Girl of Fire an Thorns. I had never heard of the before, but after reading the review I might have to check it out.

I really enjoyed this. I am looking forward to the sequel, but yes, it wasn't perfect...

I really enjoyed it. And yes, I'm a fan of all those things you mentioned. :)