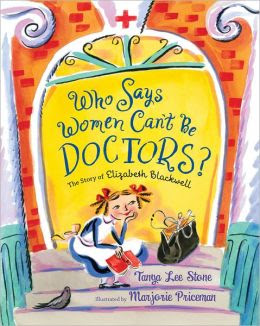 I'll bet you've met plenty of doctors in your life. And I'll bet lots of them were women. Well, you might find this hard to believe, but there once was a time when girls weren't allowed to become doctors. Back int he 1830s, there were lots of things girls couldn't be. Girls were only supposed to become wives and mothers. Or maybe teachers, or seamstresses. Being a doctor was definitely not an option. What do you think changed all that? Or should I say....WHO?

This picture book biography would make a great read aloud. 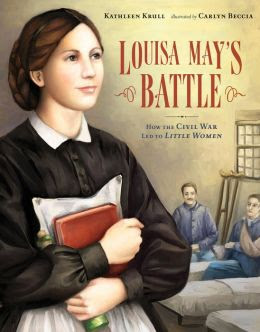 For older readers, Louisa May's Battle is an interesting biographical story starring Louisa May Alcott. (The book is not a complete biography; it focuses specifically on Louisa May Alcott's life in the 1860s as she first becomes a nurse during the Civil War, and then becomes an author first publishing Hospital Sketches and later Little Women.)

Before the Civil War, there weren't many women nurses. But the war gave women the opportunity to fill an urgent need, and also the opportunity to prove themselves capable and skilled. For women who met these qualifications: at least thirty, very plain, unmarried, strong, and two reference letters proving their moral quality, there was an opportunity to serve their country well during a time of great need. Louisa May Alcott was one woman who answered the call.

After several months nursing, Louisa May Alcott became very ill. She was unable to keep nursing; it took her months in bed to recover her health. After she recovered, she wrote Hospital Sketches. This was her first publication. This book was very significant. And its success in part led her to write another book: Little Women. 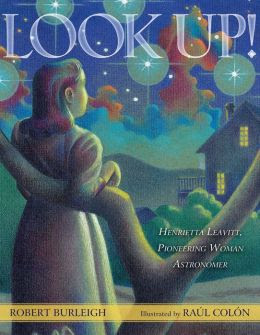 Night after night, Henrietta sat on her front porch, gazing up at the stars. How high? How high is the sky? She wanted to know everything about the wonderful bigness of all she saw. The more she looked up, the bigger the sky seemed to get. It seemed endless!

Look up! is a picture book biography of the astronomer Henrietta Leavitt. The story is of a little girl who loved the night sky, who loved the stars, who followed her dream and persevered academically in a man's field. Most astronomers, at the time, being men, of course. But she knew what she wanted, and she knew she could do it. Henrietta's job--she got paid thirty cents an hour--was not to gaze through the telescope. Her job was to examine, to study, the photographs taken by others. She was good at her job, and through her measuring, through her detailed study, she made an important discovery, a discovery having to do with measuring distances and the vastness of galaxies. 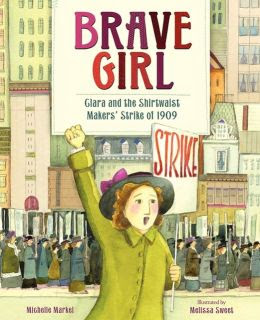 A steamship pulls into the harbor, carrying hundreds of immigrants--and a surprise for New York City. The surprise is dirt poor, just five feet tall, and hardly speaks a word of English. Her name is Clara Lemlich. This girl's got grit, and she's going to prove it. Look out, New York!

Brave Girl is a picture book biography of Clara Lemlich, a young woman who led women factory workers to strike. This picture book focuses on the social injustices of the times, and how important it was for workers to be able to form unions, and make a stand together for what they believed to be right and fair. Clara's story is inspiring. Her determination and strength seem incredible. "She wants to read, she wants to learn! At the end of her shift, though her eyes hurt from straining in the gaslight and her back hurts from hunching over the sewing machine, she walks to the library. She fills her empty stomach with a single glass of milk and goes to school at night. When she gets home in the late evening, she sleeps only a few hours before rising again."

These are nice books, interesting bios.

These all sound great! Wish I'd heard of them when my kids were young. I'll have to keep them in mind for when I have grandchildren. : )