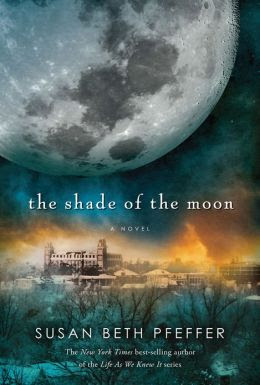 The Shade of the Moon is the fourth 'moon book' by Susan Beth Pfeffer. It is narrated by Miranda's younger brother, Jon, who is now 16. When the book opens, it has been around four years since the moon incident and around two years since Jon, Gabe, and Lisa made it into the Sexton enclave. The events of this novel cover late April through mid-August.

Jon hasn't been a character I've ever really thought about. He's his mother's greatest hope in some ways. In Life As We Knew It, the mom makes clear to Miranda and Matt that Jon is to have every consideration in the world, that he is the chosen one who must survive. In This World We Live In, we see a fourteen year old Jon have a little crush on Julie, I suppose. But honestly Jon has always been uninteresting to me.

Jon is not a nice person. The sad thing? In the enclave, he's still one of the "good guys." The standards have lowered so much that even though Jon is a complete jerk in some ways, in comparison with the other teen boys we see, he's a "nice" guy. Jon has an excuse for why he HAS to act the way he does. He is doing it so he fits in, he's doing it so the family can remain in good standing. (Lisa is coming up for review. If she passes, they'll be guaranteed a spot in the enclave for another three years. If not, well, they'll all be forced to leave unless Lisa allows Gabe to be adopted by an eager childless couple.) Jon thinks he has no choice, that he's not at fault, that this is just how things are.

Sarah Goldman is a new girl in Jon's class. Sarah is instantly drawn to Jon (it seems) and Jon is falling for Sarah just as quickly. Sarah is off-limits according to Jon's "best friends." They want Jon to choose between staying with them, or choosing the different-outsider-girl. He chooses his friends, of course, this is Jon we're talking about! But Jon still is hoping that Sarah will wait for him.

Pfeffer explores the haves and have-nots of the new world; the "grubbers" those who live outside the enclave (the laborers, the domestics, the miners) and the "clavers" those fortunate few who live inside the enclave (the thinkers, the leaders, etc.). The clavers have been taught by their teachers, their parents, their neighbors, their friends that they are THE BEST. They get the best because they deserve the best. They have been equally taught that the grubbers are the worst. The grubbers are a necessary evil. They're necessary because someone has to do the actual work, the dirty work. But to think of the grubbers as more than mere animals is ridiculous.

How does Jon feel about this? You'd think since his own mom, his own sister, his own brother-in-law were grubbers that he would actually KNOW this is complete nonsense. That he would be one of the few clavers with common decency. But Jon tends to think that his family is the exception to the rule. Jon doesn't really like grubbers, he sees them as completely beneath him. He thinks the distinctions are justified in a way.

Does Jon change? Is the Jon we meet in the first chapter the same Jon we say goodbye to in the last chapter? That is the most important thing...

I did not care for Jon, not in the same way I've cared for Alex or Miranda in the past. But his coming-of-age story is interesting in many ways. I found it an absorbing read--difficult to put down. I enjoyed learning more about how the world had changed.

I liked this one better than This World We Live In.

I decided not to get this one for my middle school library. Jon's whole thought process, along with some grusome murders and talk about rape, put this into the high school category for me, as much as I liked the series.

I agree. I think this is definitely more for older readers.