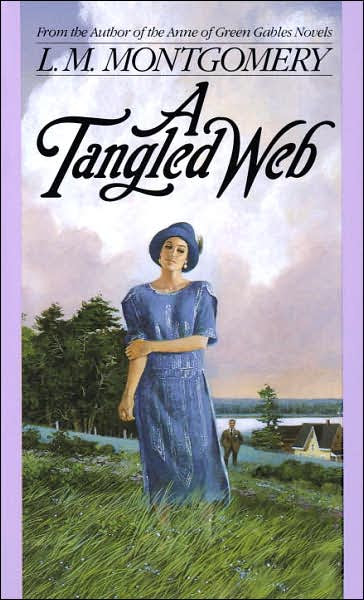 A dozen stories have been told about the old Dark jug. This is the true one.

A Tangled Web is certainly different from L.M. Montgomery's other novels. There isn't one main character or even one main story. Though I suppose one could argue that the two family clans putting on a show--acting their absolute best, just in case--over the "old Dark jug" might be the "big story." (While Aunt Becky left a will concerning all of her possessions, the new owner of the "old Dark jug" will not be revealed until a year has passed from her death.)

Tangled Web is ALL about relationships. It's about a family. A dysfunctional family. A large clan of somewhat eccentric, wonderfully flawed characters. The Darks and the Penhallows. The matriarch of the clan is Aunt Becky. (Becky Dark, nee Penhallow). She's an old woman (85), a character if ever there was one. A lady who speaks her mind. The kind of character you love reading about.

The book opens with Aunt Becky deciding to hold a "levee." A clannish get together--minus the food and drinks--to discuss her will. At the party everyone will learn who gets what. All of them--young and old, married and single--want the old Dark jug, the "priceless" family heirloom dating back a hundred years or so. The book examines so many characters, so many relationships, that it is easy to see why the title "A Tangled Web" is appropriate. But it is also one of the reasons that I love it. It's complex and clever and memorable.

Unlike some of L.M. Montgomery's other books, this one was a contemporary novel. Published in 1931, it was set within that time frame, the modern era. It's told in six parts or sections: "Aunt Becky's Levee," "Wheels Within Wheels," "Midsummer Madness," "The Moving Finger," "Blindly Wise," and "Finally, Brethren." It follows individuals within the family through the course of a year as everyone waits and sees who will be the one to get the jug. Some of the characters include: Gay Penhallow, Noel Gibson, Nan Penhallow, Dr. Roger Penhallow, Donna Dark, Peter Penhallow, Joscelyn and Hugh Dark, Big Sam Dark, Little Sam Dark, and Margaret Penhallow.

L.M. Montgomery was wonderful with characters. She was an amazing storyteller. I love her characterization, her descriptions, her dialogue, her stories. A Tangled Web is a very enjoyable read!

OH! I can't wait to get this one. I have a limited experience with Montgomery. Only having read the Anne of Green Gables series. This sounds much different. Thanks for the great review!

I have read this one and WOW!!! When I finished I was was like at least my parents families aren't the only ones with drama. I am such a huge fan of L. M. Montgomery.

I have read her Anne of Green Gables and Emily books but this one slipped my radar. By the looks of it the book seems to be a great choice for LM Montgomery's fans. Will surely read this one.

I recognize the name Penhallow from some of the Chronicles of Avonlea stories, I think. Sounds interesting. I just read LMM's The Blue Castle, and am now eager to read more non-Anne books. She certainly had a good imagination herself.