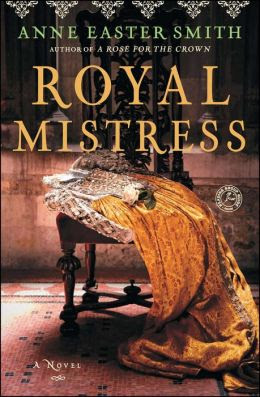 Royal Mistress is not my favorite historical novel set during this dramatic time in English history--the reign of Edward IV and Richard III. Half the novel is seen through the eyes of Jane Shore, the mistress to King Edward. The shifting between characters was necessary to tell the full story, to round it out, in places but it was also uneven. It was odd to spend so much time with just Jane's point of view, and then suddenly shift into the mind of Richard, for example, or Hastings, or whomever.

Edward IV has never been a favorite of mine. The more I read about him, the more disgusting I find him. And in a way, I feel the same towards Jane Shore. I didn't exactly look upon her with favor. Royal Mistress, of course, presents her completely sympathetically. She's presented as more than beautiful, having a certain something, a definite wit that every single man--no matter his marital status--finds irresistible.

The book opens with Jane Shore falling madly, deeply in love with Sir Thomas Grey (Elizabeth Woodville's eldest son by a previous marriage, the stepson of Edward IV). Though she's only seen him the one time, though she's only spent at most half an hour with him, she knows it is TRUE LOVE. And she knows that he just HAS to feel the same way about her. So when they next meet privately, it is humiliating. She essentially telling him, you better hurry and go see my father and tell him you want to marry me! I've not stopped thinking about you since we met! I can't wait to be your wife! It will be so fun to yours forever and ever! After awkward silence on his part, he essentially says: I never said I wanted to marry you! Where did you get that idea! I thought when you said you wanted to meet, you wanted to be in my bed, of course! That's all I care about. True, I've been thinking of you since we met last week, but I've been thinking about getting you in bed. When she next hears from him, she eagerly goes to him: YOU CHANGED YOUR MIND! You do love me! You want to marry me! Again awkward silence, his response: I told you I am not interested in marrying you. I thought you would have changed YOUR mind by now. Oh, by the way, I'm married.

Jane does get married; she gets married to a man of her father's choosing, a business arrangement. Her husband being a lot more interested in what he can get out of the marriage. He is shown as having no interest in Jane as a woman, as a wife, as the future mother of his children. There are plenty of awkward conversations, Jane starts them, of course. Her husband, William Shore, wanting to run away from her as fast as possible whenever she starts asking why or complaining.

Jane happens to catch the attention of Lord Hastings (Will Hastings). She is not as easy to persuade into a life of sin as he initially thought, so nothing comes of it. Except that he talks a lot about her to the King. The King sees her. The King wants her. The King sends for her. He sends a present along with his note. She comes. She comes oh-so-willingly.

So how does the novel present Richard III. Well, Jane hates him because Richard looks unfavorably upon her. Richard hated the fact that Edward was so immoral, so unfaithful. Jane now represents the immorality of his brother's reign. BUT. While Jane hates Richard III. Through other perspectives, the author reveals several things: 1) That Richard III is innocent of killing the princes in the tower; she places the blame on Henry Stafford (Buckingham). 2) That the pre-contract with Eleanor Butler was real; that Edward IV's marriage to Elizabeth Woodville should not have been allowed, and was in fact illegitimate, that the king and one or two of his closest knew this and did all they could to cover it up forever. 3) That when Richard III learned the truth--it is presented as truth--that changed everything. Richard had more of a right than an illegitimate boy.

Though I didn't exactly care for Jane Shore through most of the book, I did find the last part of the novel to be fascinating.

You might find The Tragedy of Jane Shore by Nicholas Rowe to be interesting.