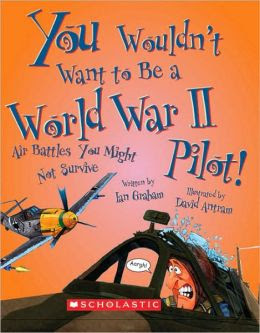 You Wouldn't Want To Be A World War II: Air Battles You Might Not Survive. Ian Graham. Illustrated by David Antram. 2009. Scholastic. 32 pages. [Source: Library]

From the introduction: "You are 16. Home is San Antonio, Texas. The year is 1934. You're crazy about aircraft and flying. Your room is filled with models and posters of airplanes. You go to your local airfield, Stinson Field, to study pilots and their planes at every opportunity..."

While this picture book may begin in the United States, it soon crosses the Atlantic. After the war begins, American pilots volunteer for Britain's RAF. This picture book, in a way, tells that story. After all, it takes several years for the U.S. to enter the war.

I liked this one. I didn't quite love it like some of the others in the series. But I thought it was good. 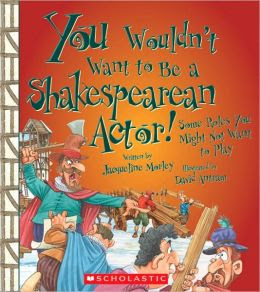 I loved You Wouldn't Want To Be A Shakespearean Actor by Jacqueline Morley. I thought it was a great introduction to the Elizabethan theatre. Readers learn about James and Richard Burbage and William Shakespeare, of course. It was very reader-friendly. I thought it was informative and straight-forward.


"It's 1594 and you're a young boy growing up in Shoreditch, a neighborhood on the outskirts of London. Until about 20 years ago, it was a quiet spot. Then actors from the city arrived and put up a "playhouse" here--a building just for putting on plays! Before this, actors--who are called players--had always traveled the country, setting up makeshift stages wherever they could find an audience. Puritans, like your parents, don't approve of acting. They say that players don't do real work--they just play. They also say that plays are just longer versions of the foolish shows that wandering entertainers have been putting on since medieval times. But you think your parents are wrong to say that plays are displeasing to God; they've never been to one! Well, you have (unknown to them, of course), and you think plays are the best thing ever. You'd love to act in one."

I loved learning all the behind-the-scenes details. For example, from the spread "Stretching Your Memory,":


You're a star player now, the company's first choice for female leads. But there's a downside to success. You're up till midnight, studying lines until you feel your head will split. The trouble is, to keep the audiences coming, the company performs a different play each day. There are some 40 plays to choose from, and you must act in all of them. You have to remember every part you've ever learned! About 15 plays a year will be new; the rest are revivals of old plays. In some plays, you perform more than one role, so altogether you need to keep at least 50 parts in your head. Minor actors, who each play more than one part, may need to memorize 100 roles. (14)

I would definitely recommend this one!!!

I wish I still had young readers. Our last two are both in High School and I miss these kind of great books! Thanks for sharing them so old mothers can get a good chuckle!