Two "You Wouldn't Want To Be" Books 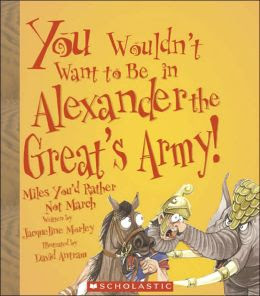 You Wouldn't Want To Be In Alexander The Great's Army. Jacqueline Morley. 2005. Scholastic. 32 pages. [Source: Library]

I have only recently discovered the "You Wouldn't Want To Be" nonfiction picture book series published by Scholastic. You Wouldn't Want To Be in Alexander The Great's Army: Miles You'd Rather Not March was the first I read. I really enjoyed it. It's reader-friendly, conversational, and informative as well. When I say the book is conversational, I mean it. The book is addressed to the reader; the reader is the YOU of the text.


It is the 4th Century BC and you are a sheep farmer living in the hilly land just north of Greece known as Macedonia. You Macedonians are tough country people, used to a hard life. Though you might speak Greek and worship Greek gods, the Greeks of the south look down on you as rough and uncivilized foreigners. However, Macedonians have been teaching those soft-living southern Greeks a thing or two recently. Macedonia used to be weak and divided but your previous king, Philip II, made it united and strong and turned the Macedonians into a fighting force that now controls most of Greece. His son, Alexander III, who is only 20, is about to start on a great scheme that his father was planning when he died. He is going to invade the mighty Persian Empire. He needs soldiers, so why not leave those bleak hills, join him and see the world?

I really enjoyed the way the information was conveyed to the reader. The information was clearly presented and quite interesting. While the illustrations by David Antram aren't what I consider great, they began to grow on me as I read and reread this one.

You Wouldn't Want To Be Joan of Arc! A Mission You Might Want To Miss. Fiona MacDonald. 2010. Illustrated by David Antram. Scholastic. 32 pages. [Source: Library]

I really enjoyed reading Fiona MacDonald's You Wouldn't Want To Be Joan of Arc! I wish my library had every single book in this series. This one had me at hello. 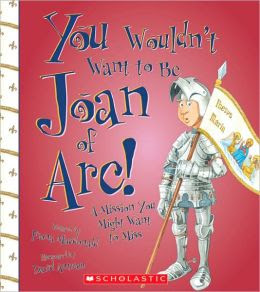 The year? It's 1428. The place? Domremy, a village in northeast France. And you? You're Joan, the daughter of peasant farmers. Your family is neither very rich nor very poor. Like all the other local youngsters, you've grown up living in fear. For years, war has been raging throughout France. One of your cousins has been killed in battle, and the village church--next door to your family's house--has been burned down by the enemy. So far, you've managed to stay safe. But you face great dangers ahead. Why? Because you dream of a secret, sacred mission: to rescue France from its attackers! You're young--just 16. You're not a famous or powerful person. You can't read or write, and you haven't been trained to use weapons. You don't understand politics or know how to plan a battle. But you're utterly convinced that you must save your country. How can you fulfill your dream?

I think this series is good because it makes history exciting and entertaining. It's never too early to cultivate a love of history, perhaps, the earlier the better!