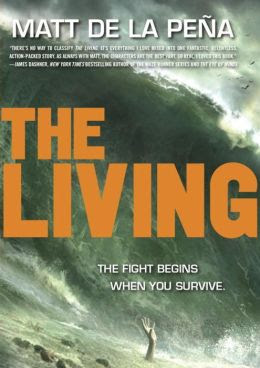 Shy, the book's hero, is working a summer job on a cruise ship. He's gotten close to a couple of guys and one girl in particular, Carmen. He's fallen hard for her. She's engaged to another guy, a law student. Shy is a mostly good guy who is not out to steal someone else's girlfriend. He's not out to get her to cheat on this guy. He just likes talking to her about anything and everything, no topics are off limits, really. She just really understands him in a way like no one else. On his latest trip, he has the feeling that someone is watching him, in a creepy not-normal way. He's right: someone wants to know EVERYTHING about a certain suicide that Shy witnessed on the last voyage.

Survival on the open sea. Something BIG and catastrophic happens. (A chain of somethings.) Shy is on board a small boat (life boat? raft? one of the two.) with only a very injured business man and a very young, very attractive young woman. Their days on the sea, their fight for survival, creates a bond, despite the fact that these two have zero in common with each other--and outside of this specific situation they'd never speak to one another. Will they survive? Will they reach land? Is help on the way? When does life return to normal again?

The Living is bleak, in a way. The novel is very up front about death. The first death (by suicide) opening in the prologue. The body count just increases from there. It's also extremely action-packed with just a few meaning-of-life conversations thrown in.

It is the first book in a series. I would say it doesn't have a proper end, and that it might best be saved for late summer (or early fall) 2014 so that you only have a few weeks to wait for the next book.

Labels: 2013, books reviewed in 2014, Random House, review copy, Survival, YA Fiction, YA Mystery, YA realistic fiction, YA Romance, YA Thriller

I really liked your review on The Living. I'm intrigued..made me want to read the book! Keep up the good work...Love your Blog Site..lots to see/read, lots of info; like your challenges. Could spend hours on this blog site alone! :-D