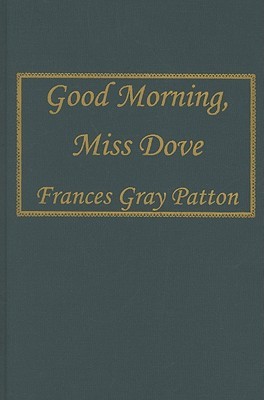 Liberty Hill was a small freshwater town--not a hill, really, but just a modest rise in the land--where the streets were named for trees and heroes, and a sense of life's continuity ran in the air. It was like a hundred American towns, smug and cozy, and it put its special stamp upon its own. People born and raised there--high and low, rich and poor--were neighbors in an irrevocable way, because their imaginations had been nursed on the same sights and sounds and legends and early ordeals. (1)

I love, love, love Good Morning, Miss Dove. I've been wanting to read this one for years and years. I saw the movie decades ago and absolutely loved it. I knew that I wanted to read the book it was based on. I was not disappointed.

Good Morning, Miss Dove is a treat of a book. I absolutely loved it. I thought the use of flashbacks worked surprisingly well. I loved seeing Miss Dove's life story come together piece by piece by piece. I also loved the sense of community, of getting glimpses into ordinary and not-so-ordinary lives.

Miss Dove teaches geography in the local elementary school: first grade through sixth grade. She has done so for many, many years. She's taught the parents of her current students. Miss Dove is a force, a force for good, perhaps, but she's described as "the terrible Miss Dove" by young and old. One school day the unexpected happens: Miss Dove is teaching when she's overcome by a sudden, sharp, painful spasm in her back. Within minutes she's lost sensation in her right leg. She's calm, collected, but insistent. She'll send a student for help, for her doctor. The doctor that arrives, however, is not HER doctor, but a former student. She receives help from two of her former students: a minister (Alexander) and a doctor (Thomas). She's admitted to the hospital. The nurse, you guessed it, a former student as well (Billie Jean). As she's in the hospital, she reflects on her life. Readers are treated to dozens of flashbacks shedding light on Miss Dove's life and the lives of those in the community. Readers get to know plenty of former students, and see the effect that the "terrible Miss Dove" had on their lives.


For Miss Dove had no moods. Miss Dove was a certainty. She would be today what she had been yesterday and would be tomorrow. And so, within limits, would they. Single file they would enter her room. Each child would pause on the threshold as its mother and father had paused, more than likely, and would say--just as the policeman had said--in distinct, formal accents: "Good morning, Miss Dove." And Miss Dove would look directly at each of them, fixing her eyes directly upon theirs, and replay: "Good morning, Jessamine," or "Margaret," or "Samuel." (Never "Sam," never "Peggy," never "Jess." She eschewed familiarity as she wished others to eschew it.) They would go to their appointed desks. Miss Dove would ascend to hers. The lesson would begin.
There was no need to waste time in preliminary admonitions. Miss Dove's rules were as fixed as the signs of the zodiac. And they were known. (8-9)

And on that unassaulted field--in that room where no leeway was given to the personality, where a thing was black or white, right or wrong, polite or rude, simply because Miss Dove said it was, there was a curiously soothing quality. The children left it refreshed and restored, ready for fray or frolic. For within its walls they enjoyed what was allowed them nowhere else--a complete suspension of will. (11-2)

"Is that the same map? Jincey asked. She pointed to the large map of the world that hung, rolled up for the summer, above the blackboard behind Miss Dove. "Is China still orange?"
"It is a new map," Miss Dove said. "China is purple."
"I liked the old map," Jincey said. "I liked the old world."
"Cartography is a fluid art," said Miss Dove.
With the flat of her hand Jincey pushed her hair back from her forehead. She had done that in moments of perplexity long ago. "Oh, Miss Dove," she said, and her voice shook, "tell me what to do!"
Miss Dove was not at a loss. She told Jincey in three short words. "Do your duty," she said.
Jincey's eyes filled with tears. "But what is your duty when your world has ended?"
"You are nineteen, I believe," said Miss Dove. Her statement was devoid of sarcasm. Miss Dove had been nineteen when her own world had ended and begun. And now she could remember without pain or longing for the old last world. It was a charming memory, like a fairy tale read to a sleepy child. But the new world was real. Whether she was happy in it she did not ask herself. She was strong. She was useful. She was Miss Dove." (74-5)

The room into which Miss Dove was wheeled was a small, blue room. Its window, giving upon budding treetops and gabled roofs, was like a big framed picture that dwarfed the wall.
"Now we'll take off our clothes and then we'll feel more comfy," said Billie Jean. She spoke in a humoring tone with steel behind it. It was clear that she intended to assume command.
"The pronoun "we" is misleading," said Miss Dove. "Unless you propose to take your clothes off." Billie Jean tittered nervously, but refused to be intimidated. (95)

Anything could be taught, of course--fine points of deportment as well as the names of the tributaries of the Nile. By six years of drill and example--forty-five minutes a day, Monday through Friday, September through May--Miss Dove had brought many a child to conform to a code that ran counter to his inclinations. But now and then--oh, a dozen times, perhaps, in the course of her teaching career--she had met a child in whom the ethical instinct, microscopic but fully-formed, was as innate as original sin. It was an almost mystical thing, that gift for goodness-and rarer than mathematical genius or perfect pitch. Hardened as she was to surprises, Miss Dove never recognized it without a sudden leap of the pulse. She had recognized it in William. (99)

Miss Dove had been reading aloud from a book the dietary habits of undomesticated animals. "Bears like honey," she read. "They are also fond of red ants which have a flavor similar to that of pickles."
Angela had waved her hand. "How does he know, Miss Dove?" she had demanded. "How does the author know what ants taste like?"
The thirty-nine other children in the room had fixed their trusting eyes upon Miss Dove, waiting for her answer. Then Angela, herself, saved the day. Brash with the imminence of victory, she had pushed her advantage too far.
"Did he eat an ant to see?" she asked sarcastically. "Or did a bear tell him?" (115)

I want to BE Miss Dove. Perhaps I should become more formal and severe. I,too, adored this book. There IS something soothing about a strict teacher; you now where you stand. Sic transit gloria mundi!

I just clicked over and requested this from my library. Thanks for the review! I love these wonderful classic books and hadn't ever heard of this one.

It has been a long time since I've read this lovely story. Thanks for reminding me of it.