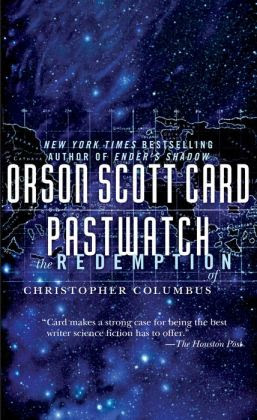 I first reviewed Pastwatch for the blog in November 2007, but that was certainly not my first time to read it. I discovered Orson Scott Card's work in a library science class in the fall of 2000. I read everything I could find of his over the next year. It was my first venture into science fiction. It was LOVE.

Semi-Apocalyptic fiction. Alternate histories. Time Travel. Need I say more?! For anyone who enjoys dystopias or apocalyptic fiction, I'd say that Pastwatch was a must read! The same is true for anyone who loves reading time travel stories. The premise and plot is enough to keep one reading. But the characterization is wonderfully done as well.

In the world of Pastwatch, history can be viewed on the big screen. In the early stages, this technology could only watch vast regions--note climate changes and social changes--the building of communities and sometimes their collapses. But as this technology is developed further, it becomes possible to watch history in greater detail, minute detail. Scientists, historians, researchers (whatever you want to call them) can do studies on communities, societies, or individuals. What's the point of watching the past? To learn. To understand. To answer impossible questions. But a few historians hope for more. What if watching the past could change the past? Each historian researcher has his/her own speciality. Sometimes they work on something personally, other times they come together into various teams. Readers meet a handful of researchers--probably six or seven and learn of their lives, of their studies.

How is Christopher Columbus involved? Well, he's one of our narrators for one thing. But secondly, he becomes the subject of interest for most of our other narrators. It is HIS life that is being dissected and held up for study. What our researchers learn is that at some point in time, future scientists, interfered or manipulated the past that turned Christopher Columbus' interest to sailing west. Their quest to figure out how and why of this manipulation will lead them on a journey with massive consequences. For they're debating whether or not they should do something along the same lines...

It is a science fiction novel. And like many science fiction novels, it deals with aspects of playing God. One of the thought-provoking subjects in Pastwatch is suffering. The historian-researchers perhaps feel they can do a better job at writing or rewriting history. That they can do a better job at alleviating suffering and establishing peace and goodwill across the globe. The future-historians take on the role of God, manipulating people in the past making them believe that they are God or God's messengers. Pain and suffering was also a big, big subject in the Worthing Saga, another Card novel.


Though Tagiri did not put her own body back in time, it is still true to say that she was the one who stranded Christopher Columbus on the island of Hispaniola and changed the face of history forever. Though she was born seven centuries after Columbus's voyage and never left her birth continent of Africa, she found a way to reach back and sabotage the European conquest of America. It was not an act of malice. Some said that it was correcting a painful hernia in a brain damaged child: In the end, the child would still be severely limited, but it would not suffer as much along the way. But Tagiri saw it differently.
"History is not prelude," she said once. "We don't justify the suffering of people in the past because everything turned out well enough by the time we came along. Their suffering counts just as much as our peace and happiness. We look out of our golden windows and feel pity for the scenes of blood and blades, of plagues and famines that are played out in the surrounding country. When we believed that we could not go back in time and make changes, then we could be excused for shedding a tear for them and then going on about our happy lives. But once we know that it is in our power to help them, then, if we turn away and let their suffering go on, it is no golden age we live in, and we poison our own happiness. Good people do not let others suffer needlessly." What she asked was a hard thing, but some agreed with her. Not all, but in the end, enough. (25-6)

Till now, all the story-seekers in Pastwatch had devoted their careers to recording the stories of great, or at least influential men and women of the past. But Tagiri would study the slaves, not the owners; she would search throughout history, not to record the choices of the powerful, but to find the stories of those who had lost all choice. To remember the forgotten people, the ones whose dreams were murdered and whose bodies were stolen from themselves, so that they were not even featured players in their own autobiographies. The ones whose faces showed that they never forgot for one instant that they did not belong to themselves, and that there was no lasting joy possible in life because of that. (35)

"It can be done," she said, blurting it out at once. "We can change it. We can stop--something. Something terrible, we can make it go away. We can reach back and make it better."
He said nothing. He waited.
"I know what you're thinking, Hassan. We might also make it worse."
"Do you think I haven't been going through this in my mind tonight?" said Hassan. "Over and over. Look at the world around us, Tagiri. Humanity is finally at peace. There are no plagues. No children die hungry or live untaught. The world is healing. That was not inevitable. It might have ended up far worse. What change could we possibly make in the past that would be worth the risk of creating a history without this resurrection of the world?"
"I'll tell you what change would be worth it," she said. "The world would not have needed resurrecting if it had never been killed."
"What, do you imagine that there's some change we could make that would improve human nature? Undo the rivalry of nations? Teach people that sharing is better than greed?"
"Has human nature changed even now?" asked Tagiri. "I think not. We still have as much greed, as much power-lust, as much pride and anger as we ever had. The only difference now is that we know the consequences and we fear them. We control ourselves. We have become, at long last, civilized."
"So you think that we can civilize our ancestors?"
"I think," said Tagiri, "that if we can find some way to do it, some sure way to stop the world from tearing itself to pieces as it did, then we must do it. To reach into the past and prevent the disease is better than to take the patient at the point of death and slowly, slowly bring her back to health. To create a world in which the destroyers did not triumph."
"If I know you at all, Tagiri," said Hassan, "you would not have come here tonight if you didn't know already what the change must be."
"Columbus," she said."
"One sailor? Caused the destruction of the world?" (50-1)

"I'm finding the place where the smallest, simplest change would save the world from the most suffering. That would cause the fewest cultures to be lost, the fewest people to be enslaved, the fewest species to fall extinct, the fewest resources to be exhausted. It comes together at the point where Columbus returns to Europe with his tales of gold and slaves and nations to be converted into Christian subjects of the king and queen." (52)

I know I shouldn't, but I kind of avoid his books because he is not really a nice person...

Becky, thanks for bringing this book to my attention. It does sound like a must-read, for the reasons that you enumerate.