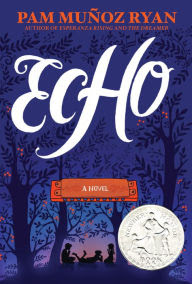 Did I enjoy reading Echo by Pam Muñoz Ryan? Yes. I found it both unique and compelling. Echo is unique in that it has three-in-one feel to it. Essentially Echo being three middle-grade novels in one. The three are held together by a fairy-tale-esque frame of a story, and, also a physical object: an harmonica. The framework of the story would lead me to think of it as "fantasy" or magical realism. But without that framework--which consists of just a few pages at the beginning and the end--the book IS historical fiction. Nothing happens within the three stories that couldn't--wouldn't--happen in the real world.

The book has three main characters. Friedrich living in Nazi Germany in the early 1930s; Mike living in Pennsylvania in the mid-1930s; Ivy living in California in the early 1940s. Music is a big part of each story, and, each have played the same harmonica.

So which story did I find most compelling? That's not a fair question at all! Friedrich perhaps would be my answer. He is very gifted, but, also publicly and privately shamed because of a birthmark and the fact that he had had epilepsy as a baby/toddler. His "imperfections" may prove too costly for him and his family with Hitler now in control. That and the fact that his father--a musician--is friendly with Jews. Is he "different"? Yes. But in a good way--a BRILLIANT way. When he hears a piece of music, he really HEARS it and REMEMBERS it. And he can play and replay it in his mind, it can "continue" to sweep him away each time. And the fact that he likes to pretend to conduct the music he hears in his head, well, that makes him horribly odd to outsiders. A handful of adults really see him as something special, but, others see him as an embarrassment, a disgrace, a mistake. This story had a few heartbreaking scenes in it. Scenes with the sister, Elizabeth, for example.

The other two stories are set in America. Mike's story features him and his little brother--both orphans. Both are musically gifted which proves to be fortunate. For a wealthy woman has to adopt a musical boy into her family in order to inherit her father's money. The problem? She doesn't *want* to be reminded of heartbreak in her own past. Can Mike and Frankie thaw her heart? Ivy's story is definitely centered on World War II. Her story is slightly more complex than the other two to summarize clearly. Essentially, Ivy (and her family) are Hispanic. They have moved a LOT through Ivy's young life. But the father receives an once-in-a-lifetime opportunity. If he will manage a piece of property for another family--a Japanese-American family being forced to resettle in an internment camp--then he will be hired on as manager or kept on as manager after the war and receive a small bit of property/house. The family experiences some prejudice after the move. Ivy can't attend school with white children. But she can participate in after school activities at the main school--including orchestra.

Overall, this one worked for me. Perhaps some scenes are better--stronger--than others. It is a long novel for middle-graders. As I said, it's like three-in-one! But I essentially enjoyed it

After reading your review I understood that this book looks really interesting. That idea of connecting three novels with one fairy tale and a musical instrument makes it more interesting to read.