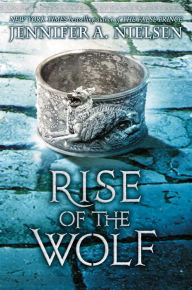 I was excited to read Rise of the Wolf, the sequel to Mark of the Thief. (I did not reread Mark of the Thief in order to 'prepare' for this one. But after the first two or three chapters, I found myself managing just fine to remember the characters and the details.)

Nic is the hero of the story. He's a former runaway slave who is now staying with his sometimes-good-sometimes-quite-evil grandfather, Radulf.

Livia is the younger sister of the hero. She is not as defiant perhaps as Nic, but, she is more loyal to her brother than her grandfather. (The two did just meet their grandfather, and they know that he was plotting against Rome.)

Aurelia is probably the strongest female character in the book, and Nic's potential love interest as well. She is resourceful, stubborn, and never backs away from a fight. Nic mostly trusts her intentions, but, sometimes--only sometimes--would prefer her to stay far, far away from the danger.

Crispus is someone Nic has a hard time fully trusting. He is Valerius' son. Valerius was a tricky sort of 'friend' to Nic in the first book. Nic is jealous--does he have cause?--that Aurelia is friends with Crispus. Crispus declares himself mostly-mainly loyal to Nic, unless, Nic should suddenly become a traitor-ish threat to the Roman empire, in which case Crispus would have a hard time still supporting him.

Radulf is a Roman general. His loyalties are definitely questionable. He's power-hungry, ambitious, and not above using his grandson to get what he wants. He doesn't make the best first impression...or second impression. When the book opens, readers learn that he chains his grandson up at night in his room so that he can't escape.

The Praetors. The super-bad guys who are after Nic for the entire book. They want Nic to give them the key so they can find the MALICE. And once they have the MALICE and the BULLA, they want Nic to make them a JUPITER STONE. These are all magical items that wield great power and threaten to destroy life as everyone knows it--completely upsetting the Roman empire.

The plot is simple: As Nic continues to learn and use magic, his life is threatened by the Praetors. If the Praetors didn't have his mother as prisoner, Nic might consider running away from his problems with his sister and friends. But. He wants to save everyone he loves. And this leads him into dozens of confrontations with the bad guys. He has dozens of close-calls. A few of these close calls involve chariot races. But not all of them. There is a HUGE, HUGE, HUGE battle at the end. And the book ends in a crime-worthy cliffhanger.

So did I like it or love it? I think I found it super-compelling as I was reading it. I found the ending frustrating because it was just WRONG to end the book the way she does. But. I found it action-packed and interesting. I mentioned that Aurelia was a love-interest, but, I want to point out there is more action than romance. There are one or two scenes where feelings are discussed, but, it is far from being a romance novel.