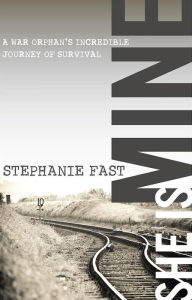 She Is Mine: A War Orphans' Incredible Journey of Survival by Stephanie Fast. 2015. Destiny Ministries. 224 pages. [Source: Review copy]
Stephanie Fast's She is Mine is a compelling, unforgettable memoir of a Korean war-orphan.

Her father, whom she never met, was an American soldier. He returned to the U.S. unaware that he was going to be a father. Her mother, ashamed and embarrassed, returned to her family. Initially beloved of her mother, the author was shunned by the rest of the family and shunned by the community in which she spent her early years. Eventually, her mother gave into the family pressure and abandoned her. The author was--at the age of four--put on a train and sent away. Told that "an uncle" would welcome her at the end of the line, the truth was she would never see her family again, never find her way back "home."

She had the clothes on her back, and, a day's worth of food. But how can a four-year-old survive on her own? But survive she did. The book chronicles the years--three or four years, I believe--she spent surviving, leading an uncertain, always desperate existence. Sometimes wandering in the country, in the fields; sometimes wandering into villages and cities. Usually her encounters with other people were negative. It went beyond her early-years experience of name-calling and "shunning." She was beaten. She was tortured. She was left to die. And yet. There were a few people who treated her kindly, with grace, who emphatically declared you must survive.

The memoir goes to really dark, really ugly places. I won't lie. Some of what she endured is horrifying and the fact that she was able to survive is a miracle.

For anyone who enjoys nonfiction, this one is a must read.
© 2016 Becky Laney of Becky's Book Reviews
Posted by Becky at 12:00 PM