World at War: Climbing the Stairs 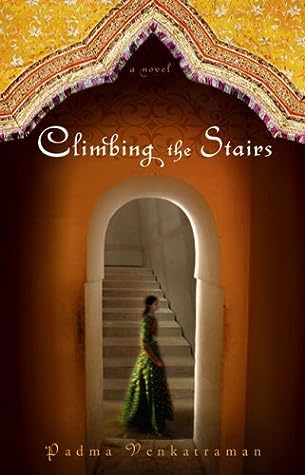 First sentence: I still remember the day we celebrated Krishna Jayanthi, the festival of Lord Krishna's birth, at our home in Bombay.

Premise/plot: Set in India during the early years of World War II, Climbing the Stairs is narrated by a charming young woman, 15, Vidya, who dreams of nothing more than going to college and continuing her education. She has an older brother, Kitta, a best friend, Rifka. When the novel begins, Vidya seems to have everything she wants within her grasp. Her parents have agreed that she won't be put on the marriage market quite yet unlike her cousin, Malati. And on a special father-daughter bonding trip, her father even agrees that she should go to college. And then....and then tragedy strikes.

Vidya's life isn't easy. It's in just as much turmoil--it seems--as India itself. There is within India a movement, a freedom movement, to create an independent India free from British rule and oppression. But there is also a call from the British to rise up and join the British ranks--British soldiers--on the field fighting the Axis powers. Yet Vidya's family at least--and presumably many others as well--believe in nonviolence. Affirm that all killing, all war is wrong. It doesn't matter who you're opposing, to take up arms is in itself wrong.


Climbing the Stairs. What does that mean exactly? Well, her grandfather and his family--his large extended family--live in a house. The men live upstairs. The women live downstairs. Women are not allowed in the men's domain. The library--technically speaking--should be off limits to her simply because of her sex, her gender. Women are not valued, not respected. Young women, girls, are seen merely as future wives, future mothers. They have no value except what value is placed on them by the men in their lives--father, brother, husband.

My thoughts: Vidya makes for a charming narrator for many reasons. But one of the reasons that I fell so in love with her as a narrator is the fact that she loves to read, loves to learn. When tragedy forces the family to move from their own home to her paternal grandfather's home, she doesn't give up hope, not completely. Life is very, very different. Very, very unpleasant. And yet, she always finds something to hold onto. And one of her greatest resources is her grandfather's library.

This was my second time to read this one. It was just as good as I remembered.