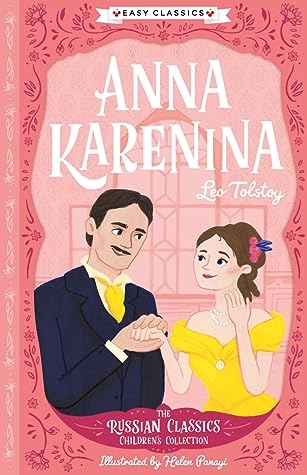 First sentence: St Petersburg in 1874 was full of the most fashionable and important people in all of Russia. One of the most respected families were the Kareninas. Alexis Karenina was a government official. His wife, Anna, ran their large home. She made sure that everything was perfect when they entertained Alexis’s important guests. They had a little son called Serezha, whom Anna adored. Anna’s life was happy, but she had married when she was young. She sometimes felt that marrying someone much older than herself had made her old before her time.

Premise/plot: Gemma Barder has adapted (but why????) Leo Tolstoy's novel Anna Karenina into an early chapter book geared towards the seven to nine crowd (but why????). The original novel has one of the greatest opening lines ever, "All happy families are alike; each unhappy family is unhappy in its own way." Tolstoy then goes on to show MANY unhappy families (and one happy one).

For those that haven't read the original OR watched one of the adaptations, I'll sum it up concisely. Anna Karenina (a married woman) visits her brother and sister-in-law when the two are at a breaking point in the marriage. (He got caught cheating). She convinces her sister-in-law, Dolly, to give her brother, Stephen, another chance--essentially as many chances as he needs. Family is everything; sacrifices must be made to keep the family whole. While visiting she has a few chance encounters with Count Vronsky (a military man). It's lust at first sight. Though she has a husband and a child, her life is utterly incomplete without HIM. And apparently vice versa? (But is this true? If Anna had said NO, GO AWAY a couple dozen times, would he have started following/stalking the next pretty girl he sees?) We'll never know because Anna didn't say no. The two begin an affair that is not so subtle. When it goes from being a little hidden to right out in the open, her marriage reaches its own breaking point. (It doesn't help that she's pregnant with Vronsky's baby). Hard choices must be made, but she follows her heart...or so she thinks. Abandoning her child in favor of her lover, she risks it all to have a half-life in the shadows. When life proves less than satisfying--why didn't he live up to all of her dreams???? why is life so hard?????)--she decides life isn't worth living at all. Goodbye cruel world of my own making. THUD.

That is one family whose story is told in the original novel. As I said, there were a couple families followed.

This adaptation contrasts Anna's UNhappy ending with Kitty's happy ending. But Kitty and Constantine's story is one visited only briefly.

My thoughts: I have read Anna Karenina twice. Once as a college student. Once as a blogger. I *might* even reread it again one of these days. But my first thought was WHY IN THE WORLD WOULD ANYONE adapt a story about adulterous affairs and suicides into an early chapter book. And I think it is a fair question. Classic or not, this book isn't really a child-friendly read. Not as originally told.


But to be fair, this isn't as originally told. In the original, for example, she goes to visit Dolly because she is heartbroken and upset over her husband cheating on her. But it's been simplified to DOLLY'S REALLY BAD MOOD FOR NO REASON in this early chapter book adaptation:

As Anna headed for the railway station, she thought about her brother, Stephen. He had written to Anna to ask for her help. He and his wife, Dolly, had been arguing. Anna loved her brother and sister-in-law and wanted to help. Plus, Anna was secretly looking forward to a few days back in the city she grew up in, away from Alexis’s dusty old friends and their serious wives. In Moscow, Stephen Oblonsky’s eldest children were running around his feet. The youngest was crying in her cot. ‘Darling!’ he shouted, as calmly as he could. ‘I think the baby wants something!’ ‘Then why don’t you pick her up?’ Dolly huffed, standing in the doorway of their tidy sitting room. ‘Me?’ Stephen asked. ‘Yes, you,’ replied Dolly, hands on her hips. ‘Then maybe you can be of some use around here.’ Stephen looked at a loss. He peered into the cot and hopelessly cooed. ‘For goodness sake!’ Dolly bustled passed her husband, scooping the baby up into her arms. ‘Shouldn’t you be meeting Constantine for dinner anyway?’ Stephen nodded and went to kiss his wife goodbye. But she turned her head away from him and started to play with the baby.

And this is how the book handles Anna's being smitten with Vronsky:

On the dance floor, Anna could not take her eyes from Vronsky’s. She felt as though she had danced with him a thousand times before. The rest of the ballroom seemed to disappear. When Vronsky asked her to dance again, Anna accepted without hesitation. When he asked her a third time, Anna knew she should refuse. It wasn’t right for a married woman to dance so many times with another man. But Anna accepted. She forgot all about politeness. She forgot that she was married. She forgot that young Kitty was in love with the man she was dancing with. All she cared about was Vronsky.

As for the suicides, it's more like boo-boos at the train station.

Reading is subjective. I suppose there are plenty of adult readers who sympathize/empathize with Anna Karenina, who side with her, if you will. Who see this affair as all kinds of wonderful and oh-so-worth-it. But I think again there are plenty that don't. The adaptation tries with every single page to present Anna Karenina sympathetically and heroically. But the truth is, she's just not that likeable. There are other characters that are a thousand--no, ten thousand times--more likeable within Tolstoy's novel. I just don't see the point of shallowly glorifying Anna's story. Shallow in that it doesn't go the depths--readers are too young to understand about SUICIDAL THOUGHTS, DEEP DEPRESSION, DESPONDENCY. And it's like well, Anna had a boo-boo at the train station and someone else raised her children. The end. (I exaggerate. The text reads something like her family learned that there had been an accident at the train station and Anna was killed.)

For the record (mom asked me this, you may be curious too), reading this would not help you pass any quizzes or tests for school. It wouldn't help you write an essay. You couldn't really bluff your way through class discussion on the themes and significance of the original.