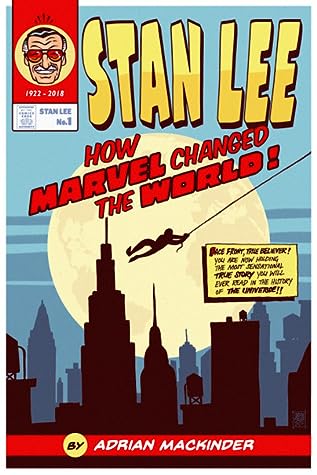 First sentence (from the prologue): Face Front, True Believer! Of all Stan Lee’s many catchphrases, this one is perhaps the most revealing. During his time as editor-in-chief of Marvel Comics, back in the 1960s, he used it wherever he could. Be it in a caption within the pages of a comic book story itself, or as part of regular editorial feature ‘Stan’s Soapbox’; ‘face front, true believer’ was a rallying cry for the ages.

First sentence from chapter one: To understand what makes a person tick, you need to wind back the clock. Our past informs our present, and what came before illuminates who we really are. Ask any storyteller. To relate to a character, you need to understand where they’ve been. There’s a reason we talk about life’s ‘defining moments’. There’s a reason we think the struggles and challenges we’ve endured in life ‘build character’. One of the reasons the recent Marvel Cinematic Universe franchise has proved so successful is because the filmmakers took their time introducing their central characters before they became who they were destined to be.

Premise/plot: This book is a biography of Stan Lee. It focuses a bit more on his career than on his personal, private life. (But I don't have a problem with that.) The subtitle really says all you need to know: How Marvel Changed the World.

It is one part biography of Stan Lee. And probably two parts the history of comic books, super heroes, and the translation of comic book super heroes onto television, film, and product lines (toys, etc.) It isn't just Stan Lee's story. It is the story of multiple publishing companies--including DC--over DECADES. It is the story of writers and illustrators. It is a story of collaborations and disagreements. It is a story of the fans--the readers and collectors. It is a story about public relations. Stan Lee marketing himself from a very young age as the face (and sometimes voice) of MARVEL. The last few chapters do focus on the Marvel Cinematic Universe. It is a story of ups and downs. It wasn't only happy-happy-good times behind the scenes. Mackinder does a good job (in my opinion) of presenting multiple sides of an issue.

Do you need to be a super-dedicated fan to enjoy reading this biography? I wouldn't say SUPER fan as a requirement. But I think some interest in the Marvel Universe probably is a must.

It is detailed. But it is not as detailed as it might have been. It isn't marketing itself as an encyclopedia. I thought it gave enough information and detail to always provide context for understanding the bigger picture.

My thoughts: I definitely found this a compelling read. It isn't a traditional biography perhaps. I would say at least two-thirds of the book focuses on MARVEL--those who worked there, the characters created both heroes and villains, the story arcs, etc--and Marvel's place within the world. It seeks to provide not only an origin story for Stan Lee himself (Stanley Martin Lieber), but to provide an origin story for COMIC BOOKS and their place in publishing history. It is hard to imagine a world without super heroes--whether Marvel or DC.

I didn't find it dry. As I mentioned earlier, I found it compelling. I wouldn't be surprised if some chapters held more interest than others for readers. But overall, I do like this one! I learned so much!