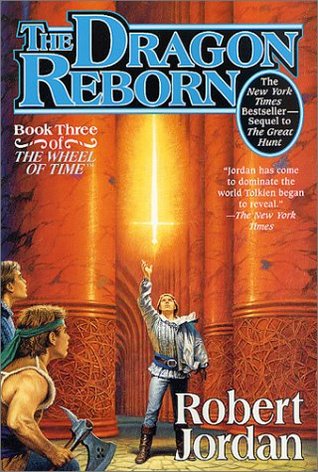 First sentence: The Wheel of Time turns, and Ages come and pass, leaving memories that become legend. Legend fades to myth, and even myth is long forgotten when the Age that gave it birth comes again. In one Age, called the Third Age by some, an Age yet to come, an Age long past, a wind rose in the Mountains of Mist. The wind was not the beginning. There are neither beginnings nor endings to the turning of the Wheel of Time. But it was a beginning.

The Dragon Reborn is the third book in the Wheel of Time series. It stars many characters whom we met in books one and two. In this one Rand is coming to terms with the Pattern--or beginning to slightly. It's a slow process. And the pattern seems to want him to be THE DRAGON REBORN. Not a false dragon, a fake, someone out looking for glory or adventure, but the true dragon of ancient prophecy. He's not entirely super comfortable with that role. But he's processing everything mainly in his own way in his own time. And doing it off screen, so to speak.

The Dragon Reborn barely features Rand. And I'm not complaining. It does feature three main stories.

One story has Egwene, Elayne and Nynaeve working together. They've been assigned the super-super-super-super secret task of hunting the Black Ajah (the DARK, DARK, SUPER-DARK branch of the Aes Sedai). (Elayne and Egwene undergo their super-secret testing to become ACCEPTED into the Aes Sedai. Nynaeve did this in book two.) It will be dangerous. The three know each other to be reliable and good--on the right side--but how can they know who else to trust?

Another story has Perrin, Lan, Loial, and Moiraine questing together. They are following Rand and of course solving more puzzles along the way. Someone else joins this group--for better or worse--and seems determined to find the Horn (not knowing of course that the Horn has not only been found but already blown).

Yet another story has Mat on a journey. In the beginning of this third book he is finally healed (he became deathly ill in book one). The Aes Sedai want him to remain in Tar Valon, but, the girls (Egwene, Elayne, and Nynaeve) have other plans for him. And this has him gambling and rambling his way cross country. He picks up a buddy too. (Who wants to quest alone???) Thom (the gleeman from book one) joins Mat in his adventures/misadventures.

The reader may suspect that these three stories will come together into one story by the end, and, of course, you'd be right. All the questing groups DO end up in the same place at the same time. The only one whose quest we do not follow is Rand. And as I said I'm not complaining. What little we do hear from him is enough for me.

This one continues to develop the cultures and politics of the fantasy world. In particular we continue to look at the corruption within the Aes Sedai. (Of course corruption is also found in the governing bodies of other countries).

Dreams. Dreams. Dreams. More dreams. One of the big threads of this one are the dreams or NIGHTMARES that all the characters have from cover to cover. Are the dreams prophetic? Do they mean something? Why are so many people sharing the same dream? Do the dreams hold all the clues needed to defeat the enemy?

This was my first time to reread The Dragon Reborn. I am definitely enjoying rereading the series. I hope to get to books I've never yet read in the series. I am liking the world building and the characterizations.

I will say that sometimes it does feel a little creepy to unpack the book and think deeper about what is going on. Rand was fourteen in the first book. (As are Perrin and Mat). Yet it seems that all the adult women in this world Jordan has peopled--no matter their culture/ethnicity--seems to take one look at Rand (or Perrin or Mat) and think YUM. CANDY. The fact that so many grown women want to flirt seductively with a fourteen or fifteen year old is creepy. (I believe in the third book it's been a little under a year since the adventure began? They left in spring and the third book mentions it being winter). It is easy to get distracted by all the other drama--the ultimate showdown between Light and Dark--to forget that these heroes are YOUNG. You can almost recast them in your imagination as being older (say eighteen, nineteen) and begin to think nothing of it. I do wonder why Jordan didn't just make them older to begin with? Like Lord of the Ring, Frodo is in his 30s or 40s. Bilbo Baggins wasn't all that young on his quest either.

But overall I am loving the series. Quite an entertaining read.