51. Siege of the Seven Sins 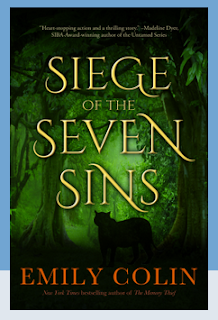 First sentence: The world is on fire, or I am.

Premise/plot: Siege of the Seven Sins is the sequel to Sword of the Seven Sins. In the first book, Eva and Ari fell madly, deeply in love with each other. Love of any form--even familial--is FORBIDDEN in the Commonwealth. But romantic love is especially frowned upon. Good thing they had a way out, right? Well, their exit from their cruel society didn't exactly go as planned--far from it. In fact, it was one disaster after another. But now that they're finally, finally, finally free from the Commonwealth and the past, they can be together forever, right?

Well, not exactly. And not all obstacles are coming from without. In fact even without the NEW powers-that-be (the ones in rebellion against the Commonwealth) and the Commonwealth (which we explored in the first book), these two are just stubborn and stupid enough to mess up their relationship without another soul interfering.

Eva is exploring her new body--or BODIES--as the case may be. And being around Ari may just be the death of them both...

My thoughts: The first half of the book was PAINFUL. I'll clarify what I mean by painful. Every single Eva chapter was like, I WANT TO BE WITH ARI BUT I CAN'T. And every single Ari chapter was like, I WANT TO BE WITH EVA BUT I CAN'T. And literally all that was going on was whining by both characters about how life was so super unfair and tragic because they couldn't be together together. In the background, there were hints of life going on for everyone else in this world.

The second half of the book improved a good deal. Ari and Eva still really wanted to be together together but couldn't. But. Also action and adventure started taking center stage. By the last few chapters, plenty was happening.

Does stuff happening at the very end of the book make up for all that came before???? Not really.

This might be a case for two books being stretched to make a trilogy. I'm assuming it will be a trilogy and that it won't be longer. Because if the same drama is going to have to go on for each book--Ari and Eva wanting to be together but being held back for reasons--then it's going to get old really fast.

For readers who want 98% romance and 2% dystopian world building, these two books might make a good fit. (I would say the first book it was more fifty-fifty. There was a lot of world building and character development....especially in comparison with the second.) I personally enjoyed book one a great deal more than this second book in the series.

"Let me tell you about wanting, Eva. The world could burn and the moon go dark and I would still want you. When I fight, you're the strength behind the arm that wields my blade. Eva, I love you. And nothing that happens between us--nothing you say to me--is going to make that stop." My voice breaks. "So please. Tell me what I have to do--what I have to say--so I won't lose you."

Labels: 2021, books reviewed in 2021, dystopia, YA Fantasy, YA Fiction, YA Romance, YA Science Fiction