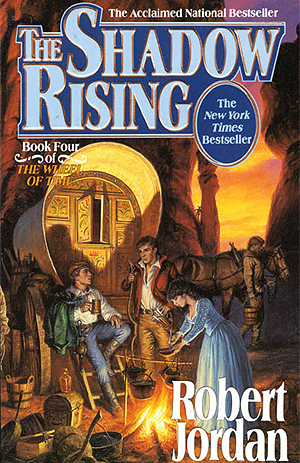 First sentence: The Wheel of Time turns, and Ages come and pass, leaving memories that become legend. Legend fades to myth, and even myth is long forgotten when the Age that gave it birth comes again. In one Age, called the Third Age by some, an Age yet to come, an Age long past, a wind rose on the great plain called the Caralain Grass. The wind was not the beginning. There are neither beginnings nor endings to the turning of the Wheel of Time. But it was a beginning.

Premise/plot: The Shadow Rising is the fourth book in the Wheel of Time fantasy series by Robert Jordan. The series has grown more complex--in my opinion--with each book. The cast of characters and the amount of side stories increases.

There are four-ish main stories unfolding all at once. Not all chapters are narrated by the good guys. Occasionally (for whatever reason, for better or worse) Jordan gives us sections--sometimes entire chapters--from the point of view of the villains. Usually these are super tricksy and confusing to piece together. (It could be because readers are trying to keep up with a thousand plus named characters. According to Wikipedia the entire series has over 2,700 named characters). Darkfriends including the "Forsaken." Seanchan. Children of the Light.

So the main stories:

Rand is out to fulfill more prophecy and be recognized by the Aiel as He Who Comes With the Dawn. It won't be easy. I won't say it's more difficult than any other or every other obstacle he's faced in previous books. But he's always in danger--with a target on his back, if you will--plenty want to turn him, use him, destroy him, etc.

Mat and Egwene travel with Rand for very different reasons. It has been revealed to Mat that his life depends on him going to Rhuidean. The two go into the abandoned city--VERY SPOOKY ABANDONED CITY--together and have very different experiences. Egwene is there to learn from the Wise Ones how to dreamwalk or better dreamwalk.

Moraine (and presumably Lan) are along for this adventure as well. Though as more characters come into the stories, they seem to fade into the background and be less significant.

Aviendha is introduced I believe in this book. She seems to play a major role in the story. She watches over Rand, and it seems to be a case of hate at first sight. (But is this hate love in disguise????)

Nynaeve and Elayne are still in search of the Black Ajah. Their mission takes them to Tanchico. Along for the ride are Thom (the former gleeman) and Juilin Sandar (whom we met briefly in a previous book). It is tricky business looking for the Black Ajah because they are hunting hunters. If they channel, they risk alerting the bad guys to their presence. Yet sometimes it seems so necessary to channel in self defense as they face risks and dangers.

Perrin and Faile (along with Loial, whom I adore) return to Two Rivers. But all is not well--far from it--at home. In the two years (roughly) he's been gone, a LOT has changed. And the lives of those he cares about (and those he's just grown up with) are in danger. He will have to be ever vigilant and ready to fight, fight, fight if he wants to protect his people/country. MEANWHILE, PERRIN AND FAILE GET MARRIED. *Squeal*

Min--for whatever reason, convenience to the story really--is at the White Tower. And she's there just in time to possibly save some lives. All is not well at Tar Valon. And it seems the Black Ajah have a few tricks.

The stories are told unevenly. That is they don't receive equal attention and weight. You might go twenty chapters without hearing from a character only then to have them pop up again.

My thoughts: I have thoughts. I do. I wish I had a paperback copy of this one. The hardback was cumbersome to read from. But the last third was truly EXCITING and ACTION-PACKED. I might compare the first third being like standing in line to ride a roller coaster. Your feet start hurting. You seem to barely be moving. It might be hot. You are just ready for the thrills. The second third is like getting on the roller coaster, getting ready to hold on, and perhaps going up that first big hill. The last third--as I mentioned--is ALL THRILLS AND EXCITEMENT. In the end it makes it worth it.

I am so thankful there is a glossary. It is super handy. I can't imagine listening to this on audio book without a glossary to turn to whenever you need it. I also can't imagine loving an e-book as much for the same reasons. (Though probably an e-book would have a table of contents so maybe it wouldn't be impossible.)