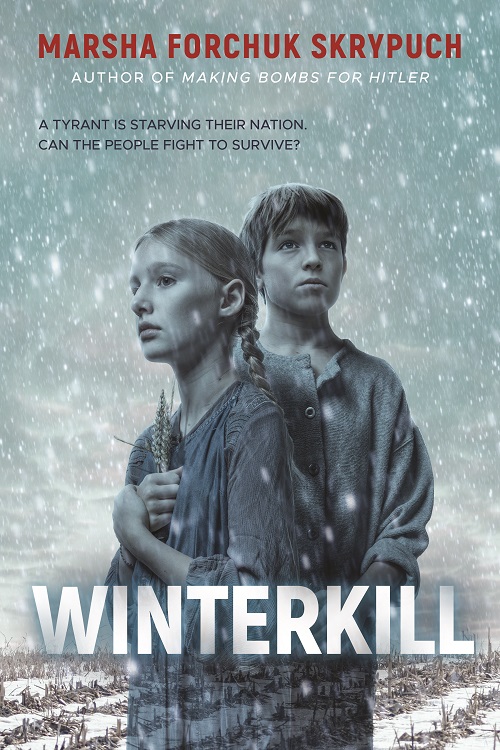 First sentence: Tato and I had just entered the village after inspecting our wheat field.

Premise/plot: Marsha Forchuk Skrypuch's newest historical novel is set in [Soviet] Ukraine in the early 1930s. Nyl [and his family, his friends, his community, his country] will soon be in the fight of their lives. Not a fight with weapons, perhaps, but a fight all the same. The Soviets [Communists] are there with Stalin's "five year plan." And compliance, well, it isn't optional. No matter how wary, skeptical, or concerned--one "must" comply. Even if complying defies all logic, all reason, all common sense. Nyl and his family are farmers. They farm. It's a HARD life, no doubt, no question. Packed with plenty of concern and worry in any year. But since Stalin, well, the biggest fears and worries have changed.

The novel opens with foreigners--Canadian Communists--who have come to live the glorious life under Stalin taking inventory of their farm. Nyl [and family] are mostly nervous and wary. What could this mean for them down the road? They didn't expect "down the road" to occur literally within a day's time. Life for Nyl [and his family, friends, community] will NEVER, EVER, EVER be the same.

And as the novel unfolds, it only goes one direction from there--and it isn't up. Skrypuch is writing about the Holodomor. The powers that be have decided to starve the Ukrainians and erase them--quite literally--from the landscape. Genocide by starvation. This, of course, was phrased with a million promises. Well, "promises," I suppose.

My thoughts: The cover might not be bleak enough for the contents. This is INTENSE. This is bleak. This is based on history. And I'm going to guess MOSTLY unknown history. I learned so much. It was heartbreaking knowledge. Truly heart-smashing-and-shattering. It was brutal. Yet I feel it was an important story to tell. History is sometimes horrifying, brutal, terrible. But I think it would be worse to cover it up, to hush it up, to deny, to ignore.

While this one may not be for every single reader--it is BRUTAL, I tell you--it is so very well-written. It was impossible to put down. It was a book that will leave a mighty big impression on me.