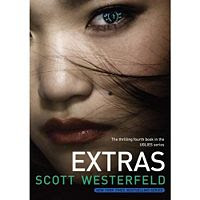 As I mentioned on Reading with Becky a few days ago, I have been reading (make that have read) Extras by Scott Westerfeld. I finished the book late on Tuesday. How to describe it here? Hmmm. Well, I've resolved to post NO SPOILERS. Since Westerfeld's blog posted the text of Chapter One, I consider that to be something I can freely discuss here.

Westerfeld's latest book, Extras, is due out this October. It begins three years after the mind-rain. What is the mind-rain? That is the phrase used to describe the global effects of millions of people's minds becoming unpretty. Specials concluded with Tally and David reuniting to become the new Specials who would watch societies and keep a look out for trouble and danger.

Extras opens with a girl, Aya Fuse, lying in bed and talking to her AI hovercam, Moggle. I like the similarities between the openings of Uglies and Extras. Both feature young fifteen year old girls, Uglies to be exact, who are planning on crashing a 'New Pretty' party. Of course their motivations are completely different, but their ability to pull off tricks makes Tally and Aya somewhat similar. But a lot has changed in three years. For one, this Uglyville and New Pretty Town are on the other side of the world--Japan. Second, this is all after the mind-rain so very few if any are left bubbleheaded. (The ones that are bubbleheaded, are bubbleheaded by choice.) This age group still parties. Parties a lot. But they don't all look alike anymore. They don't all think alike anymore. There are now dozens of dozens of different cliques. (Manga, tech, pixel-heads, kicker, surge-monkey, etc.) Third, this is a society based on fame and popularity. And what Aya wants more than anything in the world is to be famous. She'd have to be invisible to sneak into the party but that was no problem..."Aya Fuse was an expert at being invisible. Her face rank was proof of that. It sat unmoving in the corner of her vision: 451,396. She let out a slow sigh. In a city of a million, that was total extra-land." (4) Tally's driving motivation in Uglies was to be pretty. Aya's is to be famous. Both girls are strong, independent, and stubborn. Aya's story can't be separated from her friends. Hiro, her brother, Ren, her brother's best friend, Frizz, her 'radically honest' love interest, and Moggle, her AI hovercam.

As far as the plot goes, Aya's adventures are exciting, intense, suspenseful, and surprising. And that's all you'll get from me!

I think Westerfeld has yet again captured what it feels like to be fifteen and invisible and waiting for 'real life' to begin. That moody in-between time of wanting more. Of wanting all that life has to offer right then and there.

I have loved all of Westerfeld's YA novels: So Yesterday, the Uglies trilogy, Peeps and Last Days, the Midnighter trilogy. But I think this might just be my new favorite. It was very, very good.

Read my review of Uglies, Pretties, and Specials. I reread them all just before reading Extras.
Posted by Becky at 9:55 AM

omigodomigod *squee* cant waitt. this is going to be soooo extremely fawesome. but im going to have to stick with the fact that first books are almost always best, although thats not always true. but since this was originally planned as a trilogy im guessing that probably goes along here. So, Here's hoping Scott can overcome my crazy thinkings and make this book the most amazing in the series *hem hem* sorry. the most amazing [companion book] to the Uglies Trilogy. love ya all, lili

I am really looking forward to october. i have been waiting months for extras to come out.

HEy, can someone explain the actual plot? I need it for a project,

hahahahahaha u didn't read the book did u, i kno i didn't so im just reading the summaries so i can get a thing on wat happened, this book was so boreing, iv read the other ones and this one was absolutly terrible