Mysterious Edge of the Heroic World 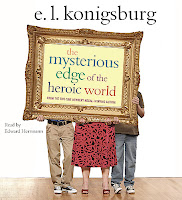 Konigsburg, E.L. 2007. The Mysterious Edge of the Heroic World.

Last week was a somewhat weird reading week, I read a series of books all in a row--Eggs, Tamar, and The Mysterious Edge of the Heroic World--that I was all iffy about. Each had strong elements. But each one had just one or two things that made me hesitate about saying that I loved them...or in some cases saying that I enjoyed them. I liked The Mysterious Edge of the Heroic World. But I don't think I can say I loved it. But I am glad I read it.

Amedeo Kaplan has just moved to a new town and..."For the first time in his life Amedeo was dealing with being the new kid in school, the new kid in town, and finding out that neither one made him special. Quite the opposite. Being new was generic at Lancaster Middle School. The school itself didn't start until sixth grade, so every single one of his fellow sixth-graders was a new kid in school, and being new was also common because St. Malo was home to a lot of navy families, so for some of the kids at Lancaster Middle School this was the third time they were the new kid in town. The navy seemed to move families to any town that had water nearby--a river, a lake, a pond, or even high humidity--so coming from a famous port city like New York added nothing to his interest quotient. Amedeo was beginning to think that he had been conscripted into AA. Aloners Anonymous. No one at Lancaster Middle School knew or cared that he was new, that he was from New York, that he was Amedeo Kaplan." (2)

Amedeo is a likeable character. He is easy to relate to. Who hasn't at times felt like they were in Aloners Anonymous? (Especially at the age!) And as the book goes on, Amedeo's search for a good friend or two becomes interesting. The main characters of the book are William Wilcox, a boy his own age who happens to live in the neighborhood, and an eccentric old neighbor, a lady, Mrs. Zender, and his godfather, Peter Vanderwaal.

Mrs. Wilcox, William Wilcox, and Amedeo are cleaning, sorting, and organizing Mrs. Zender's estate as she is preparing to move to a retirement community. Each room, each item has a story it seems. And the woman is very particular. At times she's likeable. But at others, she is very aloof. Very strange. Not quite within reach. Each day after school, William and Amedeo go to Mrs. Zender's house and help out. They enjoy searching for treasures. Both hope to make a great find. Especially Amedeo.

But the book isn't narrated by Amedeo alone. It isn't his story alone. The chapters alternate between Amedeo, middle schooler, and Peter Vanderwaal, art dealer. It was harder for me to connect with this storyline. I knew that eventually--probably three-fourths through the book--there would be a great aha moment when the narratives would begin to come together and make sense. But it was a long journey. Peter is considerably older than Amedeo of course. He runs an art gallery of some sort, I believe. (Or else maybe an art museum??? Anyway, he displays art and has art shows). His narrative has him returning home for his father's funeral, returning with a box of his father's belongings, and working diligently on a new show that will be opening featuring some of the Degenerate Art as deemed by the Nazi party.

This isn't your typical book. This book isn't about a typical middle schooler who is trying to make friends, trying to avoid the school bully, and complaining about homework or teachers or parents. This is a 'unique' boy with unique interests. I typically love books where young people--teens and kids--befriend the older generation. I love intergenerational novels. But this wasn't even that. It had some elements of that, but really all you can say about it is that it's in a category all by itself.
Posted by Becky at 10:13 AM