A Journey To The Center of the Earth

This was actually my first experience reading Jules Verne.

I was actually inspired to read this novel after watching--or should I say enduring--the Hallmark 1999 production of Journey to The Center of the Earth. The movie--originally a miniseries--was broadcast on Ion--an essentially useless station that rarely has anything entertaining on. (It's not always the case, but it's often the case). However, they pride themselves on having four hour long movies on every weekend. This movie starring Jeremy London, Treat Williams, Hugh Keays-Byrne, and Tushka Bergen barely resembles the classic 1959 movie production. It was set in New Zealand for one thing--not Iceland. And the whole point of this expedition was NOT to get to the center of the earth in the name of science and mankind, but to venture down into the unknown ONLY for the sake of trying to find this woman's husband. Alice Hastings is a woman whose philandering husband has undertaken a mysterious journey to the underworld. She 'hires' Theodore and Jonas Lytton to help her find him. They, of course, need a guide but it won't be one named Hans. This one's McNiff. Now Alice's husband, Casper, wasn't seeking this expedition in the name of science and mankind either. He was looking for a way to get rich quick. Different setting. Different emphasis. Different plot twists. And let's just say that they took liberties adding an underground party-driven, sex-crazy tribe. Of course, Jonas Lytton (Jeremy London) has to get busy with one of the natives and cheat on his fiancee. There are just so so so so so many things that are wrong with this movie.

Read some User-Comments from IMDB

Here is one of my favorites:

Marcus Eden-Ellis writes, "Oh my, such a great tale so artlessly told...I guess if you really want to know about this film, watch it and see for yourself but I warn you now, it's about fifteen hours long. At least that is what it felt like! But I guess the best flavour of the piece comes from the fact that the women of an underground undiscovered tribe of natives wear make-up, speak English in a late 20th century idiom and shave their armpits with some kind of incredibly close shaver. And they dance disco style! All this in the nineteenth century...Go on, try it. It's one of those "so bad, it's good" type movies..."

But oddly enough some people actually like it. They even praise it. They even claim it follows the book. Methinks they have never read the book. I'm not a genius but when I kept seeing sex scene after sex scene, I was thinking...this doesn't look very Jules Verney to me.

For a very nice and not too openly saracastic summary (but sarcastic enough to be liked by me), read here.

Here is what I have to say about this movie. One good thing came from having watched it: I went to my local library and checked the book out. True, I did it only to *prove* that the movie was so, so wrong in its spin on the classic. But it did motivate me.

The 1959 movie is set in Scotland with largely Scottish and Icelandic characters. The 1999 movie has the Lyttons being American, I believe, although I can't be 100% sure since I'm trying my hardest to forget as much as I can from that experience. The book has the professor/uncle character being German. His name: Professor Von Hardwigg. The nephew is called Harry or at times Henry. (The last name is Lawson. He is English.) The book has a guide named Hans which they pick up in Iceland. I'm not going to search to find out what his last name was. The point being that there is no woman along for the expedition. And sadly, there is no duck.

Another big difference, there are no villains in the book. No race to be the first. No Count Saknussem character that haunts, chases, or threatens them. No murder plots that add the element of danger from another human being. No weeping widow to bargain with.

The book is narrated from Harry's point of view. In the book, he is a reluctant traveler. He wasn't eager to join the expedition. In fact, he does everything in his power to persuade his uncle that it is madness. But his girlfriend, his uncle's goddaughter, Gretchen, is the one coaxing him to go. Pleading with him to go out and be an explorer, an adventurer. His narration is what I enjoyed most about the novel, actually, his skepticism, his sarcasm, his doubts and fears. His observations of this whole 'crazy' scheme from beginning to end.

I do enjoy the 1959 movie. I had seen it at least twice as a child. And I rewatched it this weekend so I could write my review. It has its enjoyable qualities. I especially liked the addition of Gertrude as a character. And I must say that Peter Ronson and Pat Boone weren't hard on the eyes. I had not realized that before. I apparently didn't notice things like that back then. (Or maybe they just didn't rate compared to Michael J. Fox or Kirk Cameron?) It has its laughable moments as well. It's hard not to notice how ridiculous some things are. But overall, I enjoyed revisiting this movie. 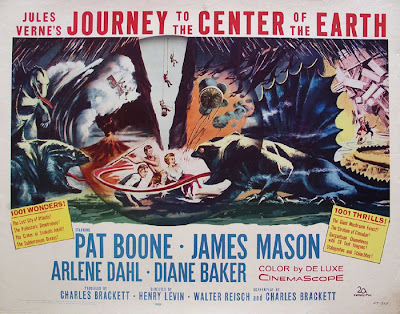 Hi Becky
Thanks for plucking my review out of IMDB!!
I have just entered a profile on Jacketflap - can I add you as a friend (not sure how that works...)
Best regards
Marcus

I'd love the add as a friend.