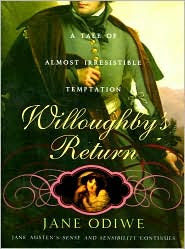 Marianne Brandon was bursting with news to tell her sister and was so excited at the report that her husband had divulged at breakfast before leaving for Lyme that morning, that she did not consider there to be time enough to don her bonnet.

This Austen-sequel focuses on Marianne and Margaret. These two sisters star in Willoughby's Return by Jane Odiwe. Marianne is somewhat happily married to Colonel Brandon--the two have a child together after all. And Margaret, as the youngest, is just coming into her own. (Elinor stumbles her way into a few scenes, but by far the book focuses on the more passionate sisters.)

I'm not convinced that Willoughby's Return is the best title for this one. Because I'm not sure that is where the focus is. On the one hand, this one tends to be Margaret's coming-of-age. Her first taste of love and passion. (But by passion, I don't mean anything inappropriate.) On the other hand, there's enough of Marianne's discontent to keep it from being the story of one sister.

What should you expect from this one? It's essentially a remix of Sense and Sensibility. Margaret is a mini-Marianne. And Margaret's love interest, Henry Lawrence, is a mini-Willoughby. The passion and desire is there. These two are drawn together in an almost fated way. Until Margaret goes to London (with her sister Marianne and Colonel Brandon) and discovers that Henry is courting someone else. Someone his mother approves of. Their engagement--Henry and this other woman's--seems to be a matter of fact. Something that will be announced any day now. Henry acts like Margaret is nothing, a nobody. And she's crushed, of course, much like Marianne was crushed not so long ago.

Will Margaret win her love? Can Henry's friend, John Willoughby, talk some sense into him? Can Henry and Margaret have the chance that Marianne and Willoughby never had? Can Willoughby's big mistake teach Henry to not take love for granted?

If this one has a flaw, it would be that I never really felt a connection with Colonel Brandon. He's a stiff, cardboard character. So flatly and uninspiredly drawn (in my opinion) that it's hard to imagine why Marianne should be happily married to him. This is something that saddens me. Because I think he was such a good person in the original. Someone that I actually liked. Marianne and the Colonel are having some communication problems. She doesn't feel that he loves her as much as he should or as much as he might. She feels that he doesn't value her, doesn't place her and her child first in his life. She's insecure in her relationship, shallow and a bit jealous. Is this understandable? Is his concern for his ward and her child reasonable? Are his constant visits necessary? His drop-everything-and-attend-to-them attitude right? Should his wife and child be more important than his ward and her child? He's presented as always placing them before Marianne. Wouldn't that be difficult?

Since Marianne refuses to meet Eliza and her child, she automatically assumes the worst each and every time. In her mind, Colonel Brandon *must* be in love with Eliza. Eliza is the rival. She has to be. She just has to be. Marianne can't imagine a different scenario. So she works herself up into a fury every time Colonel Brandon leaves. So it's quite easy for Marianne to be tempted away by Willoughby for a few private conversations and kisses.

Did I like this one? A little. I almost wish it had been exclusively about Margaret though. I do recommend it for fans of Sense and Sensibility though.

© Becky Laney of Becky's Book Reviews
Posted by Becky at 8:10 AM

Interesting review. I'm not sure if I should read this one or not . . . I would love to read a follow-up to S&S though!

Becky: I'd be interested to know if you saw similarities between Henry Lawrence and Frank Churchill's character in Emma by Jane Austen. I'll be reviewing this later in the week.

Laura, I haven't read as many for S&S as I have for P&P. Though I think there is a book about Colonel Brandon. And then there's the Sea Monster one too. (But I haven't read those...at least not yet.)

Serena, now that you mention it I can see some Frank Churchill in Henry Lawrence. Some. But unlike Churchill, I did get the sense that he loved Margaret. But there were some similarities.

I found the resemblance uncanny between Henry Lawrence and Frank Churchill, but I agree that I do think Henry loved Margaret.

I'm interested since all there seems to be are P&P sequels available!