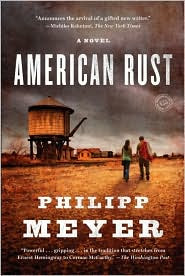 Isaac's mother was dead five years but he hadn't stopped thinking about her.

All the things you needed to know in life--you didn't learn them until you'd already made your decisions. For better and worse you were shaped by the people around you. (188)

It was his own choices. They never felt like choices while he was making them, but nonetheless they were. It was nice to think it was a vast conspiracy of others but the truth was something different. (111)

There were certain places and certain people who mattered a lot more than others. Not a single dime was being spent to rebuild Buell. (45)

As I said, you might like this one more than I did. Isaac English and his friend, Billy Poe, stumble into trouble in the opening chapter of American Rust. Decisions are made--in the moment--that set them both on a very difficult journey. Things are set in motion that are not easily undone. Bad things. This isn't just the story of a tangled, messy friendship. It's the story of a broken community. We meet many of these "broken" people throughout the novel. Many of them firsthand. Because American Rust is a novel that shifts narrators. A lot. I think this is where I struggled as a reader. 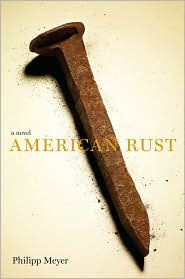 I don't always enjoy books with multiple narrators. The more narrators a book has, the messier it can be. I don't know if "messy" is quite the right word. But "confusing" doesn't seem right either. Because it's not so much that this story is hard to follow. It isn't. It's just that with the focus shifting back and forth so very much, it's hard for my focus to stay in place. I was slow to realize the point of this one. What seems so obvious in retrospect. I was expecting this book to be about something. To be a bit more plot-driven perhaps?! I don't know. What this novel does is focus on humanity, on the emotional side of things, the uncomfortable places that despa

ir and unhappiness and worry can lead us. It's about feeling hopeless, feeling stuck, trapped. It is a book about something, that something just happens to be choices and consequences and regrets.

I think some readers--especially those who love modern literature, adult literature--will appreciate this one. It focuses more on the darker side of humanity, the dark places of the soul where anger, bitterness, despair dwell and multiply.

© Becky Laney of Becky's Book Reviews
Posted by Becky at 8:14 AM

Hi Becky, Well, shoot. This wasn't for you. However, I think your review is actually quite good and very well thought out. People are on opposite sides of the fence with this book.. I'm one of the readers who thought it was amazing- but I do see what you're saying about the despair and hopelessness- very true.

Thank you so much for all the time you put into reading and reviewing American Rust. We really appreciate it. I just wish it had been a better fit!

Thanks for another great review.

I enjoyed your review, I have an ARC of this book. Your thoughts haven't put me off reading it at all, I'm even more curious to see what I will think now. It's always nice to see an honest review.