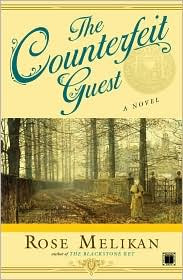 On the Suffolk coast some eight miles east of Woodbridge stood what had once been a priory for women adhering to the Cistercian order.

The second novel following the adventures of Miss Mary Finch. (Read my review of The Blackstone Key.) The year is now 1797, and the French are still quite a threat to the English. Luckily, Miss Mary is still around keeping an eye out for villains and spies. Not that she expected to find one quite so close to home.

At the close of The Blackstone Key, Mary and Captain Robert Holland practically admitted they liked each other. Mostly. They even began a secret correspondence. Even though she's now a rich heiress, and he, well, he's not so well off financially, she's hopeful that they can make a match of it in the end. She does really like him after all. She's hoping her having money won't scare him off too bad. But after the funeral of a mutual friend, he becomes elusive once again. The letters stop. It seems something has come between them again. Bother, bother!

Susannah Armitage, one of Mary Finch's friends, has invited her to London--and then further invites her to their country home--to be her companion. She's newly married to a Colonel Crosby-Nash. It is not a love match. Mary doesn't think it is anyway. Crosby-Nash just doesn't seem like a guy anyone could easily love. But is her dislike of him, her distrust, founded in truth, in reason? Does she have a good reason to be worried about her friend?

I really liked this second adventure. The "adventure" part worked for me more this time around. If you like historical mysteries with tiny hints of romance, then you will probably enjoy this one. What I enjoyed about this one are the details, the rich creation of characters.

Here are some descriptions of Mrs. Tipton:

She was very well suited to giving advice, as there were few subjects in which she did not consider herself an expert, and this one was particularly dear to her. Some of what she said was nonsense, and some was worse, but she was a keen observer of her class--the rural gentry--and generally knew to a nice detail what could and could not be done. (40)

This discussion of love naturally developed into a lecture about the wrong sorts of husband. Mrs. Tipton ran briefly through the more significant masculine flaws--drunkenness, brutality, arrogance, lack of common sense. (41)

Mrs. Tipton objected to London (she had never been there) as a place where dangerous, loose-living men conspired to ruin inexperienced young ladies, both morally and financially. (64)