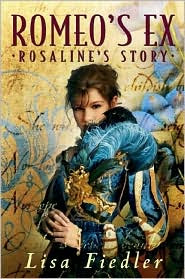 Such a season as this one Verona hath ne'er known. It is the year of our Lord 1595, summer.
A fervent heat has settled upon the city, baking the trodden dirt in the market square. I am comforted only by my own whimsy: the belief that in such heat, all manner of magic is possible, for men cannot think straight, and women dream chilly dreams. In the orchard, the defeated fruit falls to the warm grass, and the smell of it is lush and dangerous.
Equal to the heat is the hatred in which the city simmers; 'tis a selfish conflict begun long before this summer. A feud so great that it has carved a chasm of anger, like a moat, around the city of Verona.

What did I think of this retelling of Romeo and Juliet? I liked it. In fact, I really liked it in some places. (There were only a few places here and there where I didn't like it.) The story is told through multiple narrators. We've got Rosaline as our main narrator. But we also get sprinklings of Tybalt, Benvolio, Mercutio, and Romeo. (Juliet is not one of our narrators. Though through Rosaline's portions, we do hear from Juliet in dialogue.) Fiedler introduces a few twists to Shakespeare's story. And I won't begin to tell you about all of them.

Who is Rosaline? Well, she's the young woman that Romeo is sick with love over at the beginning of the play. He just can't understand why Rosaline would ever turn him down. Why did she turn him down? Well, for a couple of reasons really. One, she wants to be a healer. She wants to learn, to get an education. Two, she thinks Romeo "loves only with the eyes" and that his love is not love at all. Three, she just doesn't believe all that much in love and marriage.

I honestly didn't know what to expect from this one. But as soon as I read this bit from Benvolio's narrative, well, I knew it would work out well.

A man approaches. The pale glow of sunrise surrounds him, glinting off his hair. But e'en the breaking dawn cannot brighten this fellow's general aura of gloom.
No wonder. 'Tis Romeo.
Romeo here, in this veiled grove, accepting the morning as it spills in slanted ribbons of light upon the leaves, refracting the joy of it in his own despondent prism.
Romeo is sulking. Romeo is heartsick.
Romeo is nothing if not predictable. (31)

Love is in the air that summer. Will Rosaline have a change of heart? Will she have the happily ever after denied to her cousin, Juliet?

Even if you're not a fan of Romeo and Juliet, you might enjoy this one.

© Becky Laney of Becky's Book Reviews
Posted by Becky at 8:35 AM

I LOVE the premise of this one! I have never heard of it before, but look forward to reading it now after reading your review.

Very interesting concept! I read Romeo & Juliet a few years ago in school so it's relatively fresh in my mind.

Wow, this sounds very interesting! Will add it to my must read books! =)

As much as I dislike the play Romeo and Juliet, I think I may have to read this book. :-D

This book sounds really cool! (And I love the cover!) I'm going to have to get this one soon. :)

I've been meaning to read this one, but I wasn't sure about it. I will have to try it now.