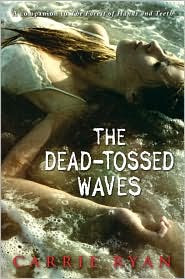 The story goes that even after the Return they tried to keep the roller coasters going. They said it reminded them of the before time. When they didn't have to worry about people rising from the dead, when they didn't have to build fences and walls and barriers to protect themselves from the masses of Mudo constantly seeking human flesh. When the living weren't forever hunted.
They said it made them feel normal.

Gabry, our heroine, lives a protected life, a sheltered life, in the lighthouse with her mother. Behind a barrier, in the seaside town of Vista. And she is content enough with how things are, with the way things have to be. She likes to keep the rules. She likes feeling safe and protected.

But. One night she is tempted by her friends to break the rules. To sneak beyond the barrier, to explore the ruins. The ruins of an amusement park. They promise her it will be just be harmless fun. A little thrilling maybe because it is breaking the rules. But not all that dangerous.

At first, it is fun to push past her fear. And then there is Catcher. A boy that she's known practically forever. Yet lately something seems different between them. Different in a good way. It is really fun to be with Catcher like this. In these few moments, life feels so real, so amazing.

If only it could last...

...but actions have consequences. And like it or not, her life will never be the same again. Is she strong enough to survive, to fight for what she wants?

The Dead-Tossed Waves is a follow-up to The Forest of Hands and Teeth. Gabry is Mary's daughter. And Gabry is around the same age that Mary was when her adventures began. (At least I think she is.) Gabry's story is just as intense as her mother's in a way. In some ways, it is almost creepier than the first. In my opinion.

© Becky Laney of Becky's Book Reviews
Posted by Becky at 12:01 AM

Huh. Strangely, I only just finished The Forest of Hands and Teeth minutes before coming across this review. I liked it better than I thought I would and now I'll definitely look out for this one.

I just got this one and can't wait to read it. I liked Forest, so hopefully I will like this one too.

This is an example of a book I'd buy for the cover. I need to read more YA fiction anyway... ;-) Thanks for the review!

Very creepy trailer! I'm excited to read this one, but I can't decide if I should go ahead and jump in now--so soon after I finished The Forest of Hands and Teeth--or if I should wait a while.