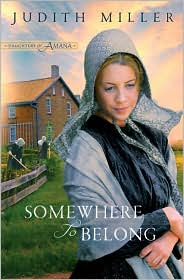 Rigid as a barn pole, I stood planted in the parlor doorway with my gaze fixed upon the pink feather-and-plum bedecked hat. Sparkling pins held it atop wavy dark tresses that crimped and coiled. The girl's hair reminded me of the curly leaf lettuce we forced to early growth in our hotbeds each spring. An artificial rose peeked from beneath the curvy brim like a vigilant watchman.

Two young women are struggling to find somewhere to belong in Judith Miller's latest historical novel. Johanna Ilg has grown up in Main Amana, one of seven Amana villages in Iowa, and for the past few years she's dreamed of seeing the outside world. Not to live in forever. She wouldn't want to break her parents' hearts any further. Her older brother, Wilhelm, left for Chicago several years before and settled down there marrying a nice girl, a rich girl. But just to see once before she herself settles down. And her would-be-suitor, Carl, agrees that she should have this opportunity before settling down, before considering marriage.

Johanna finds an unlikely friend in the new girl, Berta Schumacher. This seemingly rich spoiled girl is in for the ultimate shock when her parents surprise her with their plans after the fact. By the way, we're not visiting Main Amana on our way to see relatives. No, we've decided to move here permanently. She'll be expected to take her place--her proper place--in this communal living village. Working in the communal kitchens, no doubt. (Though any work assignment would have come as a shock to her!) Working all day, praying each night. Forced to give up her colorful wardrobe. To dress in plain clothes like all the other women in the village. How much fight does this spirited girl have within her?! Where does she truly belong? And why did her parents decide to move here to begin with? Why the sudden need to leave Chicago?

Somewhere To Belong is narrated by both Berta and Johanna. The setting is Amana Colonies, Iowa. 1877. Life isn't perfect within Main Amana. The people aren't perfect. A few have secrets that are true burdens. It is the very fact that these are flawed individuals that made me connect with the book, the story. I enjoyed this one very much.