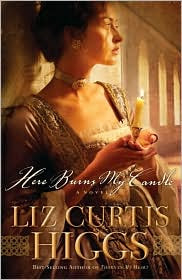 Lady Marjory Kerr heard a frantic tapping at the bedchamber door, then her name, spoken with marked urgency.

Set in Scotland in 1745, it follows the Kerr family as it struggles with matters of the heart and mind. Should the Kerr family side with Bonnie Prince Charlie (Charles Edward Stuart), or remain loyal to King George II (a Hanover).

This one is told mainly through two characters: Elisabeth and Marjory. (Though we get other perspectives occasionally).

Lady Marjory Kerr has two sons and two daughters-in-law that live with her in Edinburgh. Donald, her oldest, and his wife, Elisabeth. And Andrew, her youngest, and his wife, Janet. Both of her sons have joined the army of the side they believe is on the right. Both are willing to die for the cause. But is any cause worth dying for? Lady Marjory would do anything--give anything--to keep her two sons safe, out of harm's way. But what can a mother do when her sons have felt called to go to war, to take up arms? Is there anything anyone could have said to keep them at home?

Elisabeth loves her husband dearly. Her Donald is her everything. But she can't help being disquieted by the rumors she hears about her husband. He claims to love her, but how can she be sure of that love? Especially as his secrets start coming to light?!

Can these three women live peaceably together under one roof when the whole world seems to be turning topsy turvy?


I have read and loved three other Liz Curtis Higgs books: Thorn In My Heart, Fair is the Rose, and Whence Came A Prince. There is a fourth as well called Grace In Thine Eyes. But I haven't read that one yet. So I can't honestly say that I loved it. At least not yet! All are historical fiction set in Scotland. All are amazingly rich and satisfying. All are ones I'd recommend!

I can hardly wait to read Higgs' latest masterpiece. Though I knew that before reading your review, you've whetted my appetite for it even more. Oh, and you'll love GRACE IN THINE EYES, as well.

Because of Christ,
Sharon