For Darkness Shows the Stars (MG/YA) 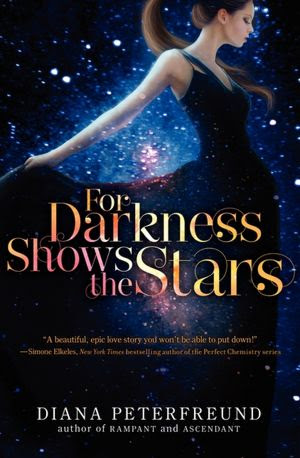 Elliot North raced across the pasture, leaving a scar of green in the silver, dew-encrusted grass. Jef followed, tripping a bit as his feet slid inside his too-big shoes.

I really enjoyed Diana Peterfreund's For Darkness Shows the Stars. Did I enjoy it because it was a futuristic dystopia, OR, because it was a retelling of Jane Austen's Persuasion? A bit of both. For those expecting Captain Malakai Wentforth to be as swoon-worthy as Captain Wentworth, well, you might be disappointed. Might. For Kai's romance with Elliot North doesn't exactly mirror that of Wentworth and Anne Elliot. Peterfreund has definitely made this story her own.

For Darkness Shows the Stars is definitely a novel about social class or status. There are three "types" of people in this futuristic world: the Luddites, those with the highest status and wealth, the elite, those that have estates and titles, those that MATTER; the Reduced, those with slave status, essentially, they are thought to be mindless sub-humans, incapable of thought and feelings, definitely thought to be genetically inferior; the POST-Reductionists, the children of the Reduced who happen to be smart enough to function with more independence in the world, they have skills and abilities that make them worth something, they are not thought to be mindless and incapable, but, they're "socially" inferior to the Luddites. No matter how smart or brilliant a POST is, no matter how much money they acquire, they will never be on equal status with the Luddites.

Kai and Elliot grew up together; they share a birthday in fact. (Actually, there are three that share an exact birthday: Kai (Post), Elliot (Luddite), and Ro (Reduced).) But their friendship always had to be a secret, for if Elliot's father or older sister, Tatiana, found out, then everyone would get in trouble. Elliot enjoyed Kai's company, enjoyed spending time with him in the barn, enjoyed watching him fix things--he's a mechanic, the son of a mechanic. But when Elliot chose not to run away with Kai when they were fourteen (or possibly fifteen?), the friendship was broken. He chose to leave the estate, to risk everything in hopes of finding a better future. Elliot hasn't heard from him since the day he left, and he still matters to her. She chose to stay not because she didn't love him, but, because she needed to be responsible, because she was the ONLY one capable of being responsible on the estate, the only one who cared for the welfare of the Reduced, and also respected the Posts.

Meanwhile, Elliot's life has been as unpleasant as ever. Her father and sister are heartless and selfish and at times cruel. The novel opens with her father destroying his daughter's wheat field--weeks before harvest. That wheat could have helped feed the Reduced, it could have been sold for a profit, as well, to help the estate. But her father's "need" for a race track was more important. He's unwilling to see that the estate is struggling financially that they have a responsibility to the Reduced and the Posts that work their land/manage the estate. Elliot doesn't even bother protesting; true, the damage is already done and nothing can bring her wheat back, but, she also has a secret of her own. That wheat was her wheat--her special experimental seed. And Luddites do NOT under any circumstances experiment.

So in an effort to help finances, Elliot decides to rent out the estate to Cloud Fleet....and one of the guests is Captain Malakai Wentforth. Of course, there are plenty of other guests as well.

I enjoyed meeting the different characters in For Darkness Shows the Stars. Since this is a retelling, there is always a chance that the characters could have been weak, shallow copies of the original. For the most part, that was not the case.

I also enjoyed the story; there were just enough twists in the story that it really worked as an original story. The dystopian setting was interesting to me. I didn't have all my questions answered--at least not right away--and this futuristic society definitely added something to the story.

Read For Darkness Shows the Stars

There’s a mission of making your Kitchen activity smooth and feasible. It’s the quality appliance gene that makes Kitchen operation just smooth, but also safe and secured. From www.rightshopping.in/Kitchen-Bar-india-online.html