The Best Night of Your (Pathetic) Life (YA) 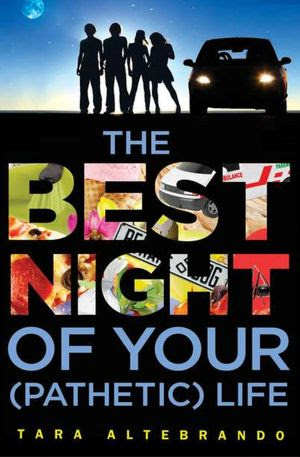 It was exactly one forty-five when we pulled into The Pines--the old tree-dotted parking lot behind the football field. The was a sort of extreme blue that seemed just right.

In The Best Night of Your (Pathetic) Life, Mary, Patrick, Dez, and Winter team up to participate in one of the final events of Senior Week. The event is an all-afternoon-all-night scavenger hunt, and readers will see teams in fierce competition with one another to win the coveted Yeti and the honor of masterminding next year's scavenger hunt. Mary is fierce, determined, and taking it a bit too seriously, in my opinion. Winning the scavenger hunt means a little something different for every team member. For Mary and in a way for the other members, it means that they are not losers, that they are not "also ran." It means being remembered, it means making memories worth remembering. It means finding your voice just in time to say goodbye to high school. So Mary does make a big symbol out of it, it is more than just a scavenger hunt to her.

So is it just about a scavenger hunt? Yes and no. I mean it's about relationships and feelings. It's about facing up to the truth and having tough conversations. For example, *something* happened between Patrick and Mary at prom that Mary does NOT want to talk about. And *something* happened between Carson and Winter at prom that Winter, at least, does NOT want to come out. (Could be because he has a girl friend, Jill, who is supposed to be part of their circle of friends. And "the truth" will not just hurt Jill, but Mary as well, since she's loved and adored Carson since he moved to town and joined their class.) But it isn't just romantic relationships at stake in Best Night of Your (Pathetic) Life. Friendships are tested as well as family relationships. Mary's sister, Grace, for example makes an appearance. (I almost wish we had more on Mary and her family.) So on the one hand, this book is seemingly about nothing: a harmless-or-not-so-harmless night of teens behaving wildly, collecting objects great and small. And their race for silly, novel items seems to me at least a bit silly and pointless and so what. (Then again, I've never gotten the "school spirit" or "team spirit" thing.) But on the other hand, there is a make-every-moment-count-because-this-night-will-never-come-around-again feel to it.

While I didn't love, love, love The Best Night Of Your (Pathetic) Life, I liked many things about it. I liked that it covers just one day. I liked that it didn't rush a romance or rush a relationship. There were a couple of directions this one could have gone in the hands of another writer. Mary could have been rushed into a relationship with the best friend after realizing that her crush was a jerk. Mary could have fallen for Lucas, a guy we learn is a student at the college Mary's going to in the Fall. (They do have a tiny bit of a connection, in my opinion). Mary could have tried to flirt her way into an oh-so-short-summer-fling with her crush. (He did seem to flirt with her a bit, but then again, I think he was flirting with a handful of girls.) But no, Mary is allowed to just be Mary, to take this time to grow a little herself. I like that Mary is almost forced into reflecting. Mary wants to avoid some things, but her friends push her to be honest and present, which Mary may not have wanted but I think she needed. I liked Patrick the best of all, I think. I am not sure that I liked Mary. And I didn't really feel a connection with Winter. And I felt we barely got to know Dez at all in any depth. I mean we see that he is someone his friends really care about, for the most part, though even they can be insensitive and blind. And Carson, well, Mary tries to make excuses for Carson as to why he's oh-so-wonderful, but actions do speak louder than words, perhaps. So in the end, I'm not sure I "liked" the characters as much as I'd have liked. But. I though this one did a nice job with complex relationships.

Read The Best Night Of Your (Pathetic) Life: