The Story of the Trapp Family Singers 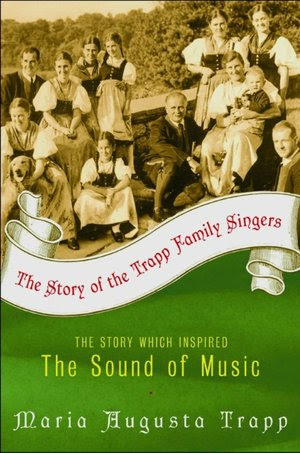 Somebody tapped me on the shoulder. I looked up from the workbooks of my fifth graders, which I was just correcting, into the lined, old face of a little lay sister, every wrinkle radiating kindness. "Reverend Mother Abbess expects you in her private parlor," she whispered. Before I could close my mouth, which had opened in astonishment, the door shut behind the small figure. Lay sisters were not supposed to converse with candidates for the novitiate.

This is the true story that "inspired" my favorite musical The Sound of Music. For the most part, the book is fascinating--especially the first half of the book. Readers meet the young woman sent to be governess to a retired sea captain with many children. In the book, she's to be governess only to one of his daughters, the rest either have nursemaids, attend schools, or have their own tutors. There are definitely some big differences between the book and the movie--between truth and fiction. (For example, the names of the children are different, as is the chronology of the story. The couple married years before Hitler came to power; they married in 1927!) They began singing together as a family out of love for music, yes, but also out of financial necessity.

Maria's first eight or nine months as a governess, particular attention is paid to their first Christmas
Maria's new role as wife and mother
Austria's changing economy and politics in the 1930s
The family's flight from Austria and immigration to the United States
The family's first experiences in America as they go on tour and learn English
The family's (forced) return to Europe--fortunately, only for a few months.
The family's return to the United States, their continuing tours
The family's settling down in America (a bit more about their tours, building of their house, building of their music camp)
The private life of the family (recollections of holidays, feast days, birthdays, Christmases, vacations, etc.)

The book is great on capturing the family's dependence on God, their reliance on God to deliver them and provide for them no matter the circumstance. The book is also great at capturing a specific time, place, and culture. For anyone curious about what it was like to be living in Austria in the 1920s and 1930s, this is a must read. For those interested in the immigrant experience during this time period, it is just a fascinating account! To see American culture--and language--from this outside perspective. The book was published in 1949, but it was up to date--so readers do get perspective on World War II from their perspective, also what the family tried to do to help Austria after the war was over.

I really LOVED this one!!!


One of the greatest things in human life is the ability to make plans. Even if they never come true--the joy of anticipation is irrevocably yours. That way one can live many more than just one life. (214)

One night I tenderly consulted by private calendar, "time eaters" we had called them at school, and it showed only thirteen more days in exile. The next morning I started spring cleaning. Under my direction the maids were taking down the curtains and proceeding to brush the walls, when I saw the three youngest children knock on the door of the study. It didn't take long and out they came again. Running over to me as I stood on a ladder washing a big crystal chandelier, they yelled from afar: "Father says he doesn't know whether you like him at all!" "Why, of course, I like him," I answered, somewhat absentmindedly, because I had never washed a chandelier before. I noticed only vaguely that the children disappeared behind the study door again. That same night I was arranging flowers in several big, beautiful oriental vases. This was the last touch, and then the spring cleaning was over, and it had been really successful. When I had arrived at the last vase, the Captain came in. Stepping over to me, he stood and silently watched what I was doing with the peonies. Suddenly he said, "That was really awfully nice of you." An altogether new tone in his voice, like the deep, rich quality of a low bell, made me look up, and I met his eyes, looking at me with such warmth that I lowered mine immediately again, bewildered. Automatically I asked what was so nice of me, as I only remembered that awful letter. "Why," he said, astonished, "didn't you send word to me through the children that you accepted the offer, I mean, that you want to marry me?" Scissors and peonies fell to the floor. "That I want to--marry you?" "Well, yes. The children came to me this morning and said they had had a council among themselves, and the only way to keep you with us would be that I marry you. I said to them that I would love to, but I didn't think you liked me. They ran over to you and came back in a flash, crying that you had said, 'yes I do.' Aren't we engaged now?" Now I was out of gear. I absolutely did not know what to say or what to do; not at all. The air was full of an expectant silence, and all I knew was that in a few days I would be received into my convent, and there stood a real, live man who wanted to marry me. (57-58)

Read The Story of the Trapp Family Singers
© 2012 Becky Laney of Becky's Book Reviews
Posted by Becky at 8:00 AM

The Sound of Music was my favorite movie growing up, and it's still one of my favorites. It's about time I learned more about the family behind the musical!

I have never even heard of this book before. Definitely something for me to check out!