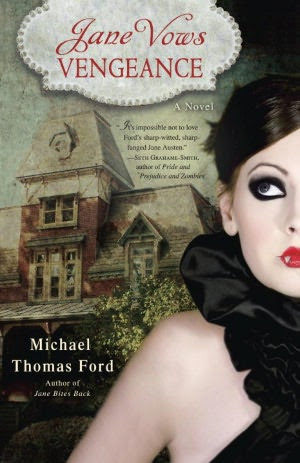 "What about this one?" Jane glanced at the magazine Lucy was holding up, opened to a picture of a bride standing in a field of daisies.

This is the third novel in Michael Thomas Ford's paranormal series. The first is Jane Bites Back, and the second is Jane Goes Batty. If you've enjoyed the first few books in the series, you'll probably want to pick this one up too.

Jane Fairfax owns a bookshop and has recently had a novel published, even had that novel adapted into a movie, of sorts. But she's a woman keeping a secret from her husband-to-be. She's a vampire AND she's Jane Austen. While this knowledge certainly isn't common information, there are a LOT of people in her life who do know, including Walter's mother--Jane's future mother-in-law. By the way, his mother is keeping a BIG, BIG, BIG secret from him too. Poor Walter! No one ever tells him anything!

This novel sees the couple heading to Europe along with their friends and family. (Lucy, Ben, and Miriam, the mother-in-law). It isn't quite a wedding trip or a honeymoon trip--emphasis on the word quite. For Walter, it's a work-related trip, a select group will be touring historic homes. Sound boring? Well, some paranormal activity will liven things up a bit.

This novel had its moments. There were a few sparkly conversations, mainly between Jane and Byron, that made me happy I decided to continue on in this series. There were times this one almost almost worked for me. Some good scenes, some interesting developments. But at other times this novel was a mess. I'm not sure if it's because this book focused on the personal relationship between Jane and Walter, if it's because the book follows the couple's vacation, if it's because the focus was more on Jane trying to meet everyone else's expectations. But something felt off about it. This one had less social commentary, less satire, perhaps.

I think this one tried to pay tribute to Agatha Christie and mystery novels, but, that aspect didn't quite work for me. As a mystery this one didn't quite work for me. So what I was left with was a somewhat boring story about Walter and Jane trying to get married peacefully and without a lot of fuss. The scene that probably bothered me the very most was their first attempt to marry. And the wedding is interrupted by Jane's husband. And the guests talk openly about Jane being a vampire, the marriage occurring almost two hundred years in the past, etc. And Walter has not left the room. The author didn't give any indication that Walter left the room, OR, that the guests were huddled together whispering, OR, that the guests left the room to talk together...AND we're supposed to believe that Walter didn't listen closely enough to catch on to the fact that Jane is a vampire....and he's completely SURPRISED by the revelation later on in the novel. I think another issue I have with the novel, with the series, is that Walter isn't a fully developed character. We don't know him well enough to love him, though we can respect that Walter is a good match for Jane, I suppose. Mainly he's just there, and sometimes he's there and reacts.

Thanks for the great review Becky. I really enjoyed this series. It made me laugh, even though the premise of Jane Austen as a vampire was startling. Ford is a master at humor and witty banter.