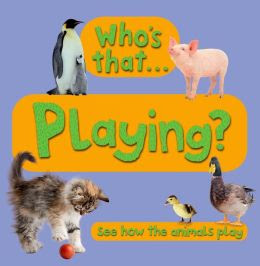 
Who's that playing?
Tip tap
I am a kitten.
I have long fur and pointed ears.

Who's that splashing?
Splish splosh
I am a duckling.
I have a beak and webbed feet.

Who's That...Playing is a fun board book for young readers--toddlers and preschoolers. Each two-page spread focuses on a different animal at play: kittens, puppies, ducklings, bear cubs, lambs, penguin chicks, piglets. Real photographs are used throughout. It is in a series of board books published by Kingfisher. Other titles include: "Who's That? Roaring," "Who's That? Jumping," "Who's That? Eating." 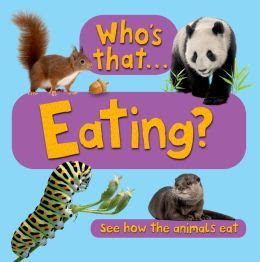 
Who's that eating?
Chomp
I am a giant panda.
I have black and white fur and I like munching bamboo.

Who's that gnawing?
Gnaw
I am an otter.
I have whiskers and I use my tail to help me swim.

If you're looking to share simple animal facts with your little one, this new series by Kingfisher would be a great choice. There are four books in this series, each focusing on a different aspect of animal life. Different animals are featured in each book. In this title, the focus is on eating. The animals featured include pandas, otters, caterpillars, squirrels, anteaters, chickens, and giraffes. 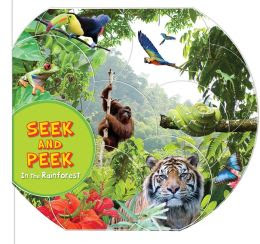 Another series published by Kingfisher is the Seek and Peek series. There are four titles in the series: Seek and Peek in the Rainforest, Seek and Peek On the Farm, Seek and Peek Dinosaurs, and Seek and Peek at the Zoo. The books are oddly shaped, which may appeal to young readers who love to grasp. Readers can choose which animal they want to read about--learn about--and turn directly to that page. But some pages feature more than one animal. And some animals are not featured on the cover. 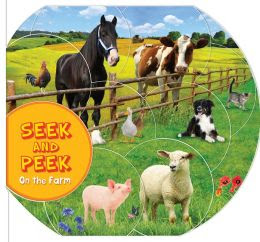 The final book I'll be reviewing today is another in the Kingfisher's Seek and Peek series. I'm curious if little hands will appreciate the oddly shaped board book--it is almost a circle. It is easy to grasp and turn pages, which may be a plus! Farm books are almost always fun, and this one isn't an exception. Little ones can learn simple facts about farm animals like pigs, horses, chickens, cows, ducks, etc.