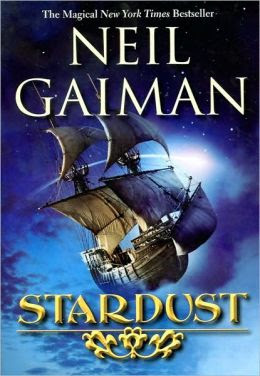 There was once a young man who wished to gain his Heart's Desire. And while that is, as beginnings go, not entirely novel (for every tale about every young man there ever was or will be could start in a similar manner) there was much about this young man and what happened to him that was unusual, although even he never knew the whole of it.

Stardust is probably my favorite Neil Gaiman novel. It's set during the Victorian time period, and it has a classic fantasy-adventure feel to it. There is definitely some romance to it--it isn't a children's book, there's some adult content after all. All the elements work together for an enjoyable read!

In Victorian novels, it isn't unusual for an author to begin his or her story with extensive background, providing readers with information that sooner or later may prove important. Details on where the story is set, what life is like in that community, the families that live there, the story--romantic or practical--of the main character's parents, perhaps even going into great detail on the successes and failures, hopes and disappointments. Wilkie Collins, for example, can spend fifty pages or so just setting up the background for his novel. Gaiman spends the first chapter of Stardust doing just that, he sets up the family history so he can move the story forward sixteen or seventeen years and get off to a proper start in chapter two with the actual hero of the story, Tristran. Is this necessary?! Yes, in Tristran's case for his parentage makes him very unique. Still, it was a little unsettling to me--the first time at least. But I think it works.

There is a loveliness to the writing, the storytelling. It is rich in detail, in places, and at times very creative. I definitely enjoyed following Tristran Thorn on his quest. I liked seeing him transform into someone a bit wiser and kinder. I thought we met plenty of interesting characters along the way. Some of these characters I liked more than others! But overall, I definitely liked it. I think I loved it more the first time I read it, however.

When I first read Stardust in 2008, I wasn't as familiar with the time period as I am now, so paragraphs like this one meant little to me:


The events that follow transpired many years ago. Queen Victoria was on the throne of England, but she was not yet the black-clad widow of Windsor: she had apples in her cheeks and a spring in her step, and Lord Melbourne often had cause to upbraid, gently, the young queen for her flightiness. She was, as yet, unmarried, although she was very much in love. Mr. Charles Dickens was serializing his novel Oliver Twist; Mr. Draper had just taken the first photograph of the moon, freezing her pale face on cold paper; Mr. Morse had recently announced a way of transmitting messages down metal wires. (5)

Update: I've now seen the movie! It is quite different from the book! I enjoyed some of the changes, but not quite all of them. I think I definitely prefer the book to the movie. I thought the book was more clever, perhaps. I think one of my favorite things about the movie was the soundtrack! It was quite lovely!

Labels: 1998, books reviewed in 2013, coming-of-age, library book, Quest, YA Adventure, YA Fantasy, YA Fiction, YA Romance

Just a quick comment. Have you seen the film? It might be worth letting everyone know that the book is quite unlike it. For one thing, there is no Captain Shakespeare in the book, and they both end very differently.
Kyra

I just finished reading Stardust today. It's the third time I've read it and I still love it. Such a fun little novel to get immersed in.