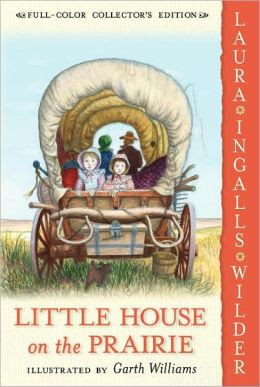 Little House on the Prairie is such a dramatic read, especially when compared with the first in the series, Little House in the Big Woods. The first half of the novel focuses on the Ingalls family journeying to Kansas (Indian Territory). It's a trip filled with MANY dangers. (When Jack becomes lost in the river and the worst is feared, well, it's hard to handle.) Even after they settle into their new place, things stay messy. At one point, the whole family becomes horribly ill, all at the same time. If not for kind neighbors (distant neighbors) checking on them because the illness is widespread, then they might all have died.

Their new home doesn't ever quite feel like home, doesn't feel right. And as tensions between white settlers and the Native Americans increase with each chapter, it's upsetting. It's quite a relief, in a way, to see them [the Ingalls] go.

If I were to judge the entire series by this one book, I'm not sure the series would be among my favorites. While there was a happy peacefulness to the first novel, this book is anxious, dramatic, full of tension and uncertainty. There isn't the assurance that everything will always work out well. (Though that could be Laura as the narrator growing up a little.) I think the novel does a good job showing Laura's unease. Laura is thoughtful and curious--at times--always observant. That doesn't mean Laura is wise or always right. (In one instance, if Laura had done what she felt to be right, things would have gone very, very wrong.)

Of course one of the main conflicts of the book is the tension between the white settlers and the Native Americans. The way that it is presented while historically accurate and socially acceptable for the times (both the 1870s and the 1930s) can prove problematic for modern readers. My first review covers this aspect of the novel. Little House on the Prairie is not the only problem novel from the time period. Not all books in the series are equally offensive.

I like what you said about the feeling of peace in Big Woods vs. anxiety in Prairie. I haven't reread as an adult, but Big Woods was always my favorite as a kid -- primarily because it's such a great food book (the syrup candy in the snow!), but that feeds into the idea of peace and tranquility. Little House on the Prairie stressed me out and I never read past it.

Not only have I read this, but also watched this on TV as a very young child. It will always have a special place in my heart.