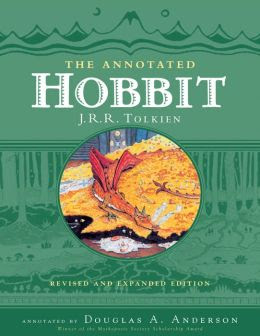 The Hobbit is one of my favorite books even though I didn't discover it until I was an adult. It's a children's book that I've read several times as an adult. One of those feel-good books that you can happily, joyfully read each and every year without tiring of it. The Annotated Hobbit makes a lovely present for people who can't get enough of The Hobbit!

After viewing The Hobbit: The Unexpected Journey, I picked up The Annotated Hobbit. It was just what I needed! The film "covers" the first six chapters of the novel: "An Unexpected Party," "Roast Mutton," "A Short Rest," "Over Hill and Under Hill," "Riddles in the Dark," and "Out of the Frying-Pan Into the Fire." The most significant chapter in this annotated edition may just be "Riddles in the Dark." Fans most likely know already that the story of Bilbo's ring varies greatly from the original publication in 1937 and the later editions published after Tolkien wrote The Lord in the Rings, the variations even becoming a part of the story in a way. But this was the first time I was able to read the full, original ending to the story. (This is found in the notes on pages 128-131 and page 134.)

I came to the text needing to "check" the "faithfulness" of the film to the movie. True, I wanted to spend time with the characters, and, of course, I wanted to read it (again) because it's a great story. But. I wanted to see if the movie got it "wrong" or "right." While that was my original intention, I didn't always keep to it. I found the characters and story so irresistible. I was reminded once again of all the lovely little things that I just ADORE about the book. Things that didn't always translate as faithfully as I would have liked in the movie. Of course, some of what I ADORED about the book made it into the film, sometimes very faithful both in tone and detail.

There were some things that are technically "from the book" but taken completely out of proportion and focus, things that were made BIG AND SIGNIFICANT that barely got more than a sentence or two at most in the novel. The thing that stands out, for example, is how the party is HUNTED in the movie. Almost from the start, the journey is perilous because of a specific threat. And every single stage of the journey is equally dangerous and life-threatening. There is a purposeful, intentional darkness (evil) beginning to move in Middle Earth. In the novel, this isn't the case. The party faces danger, yes, sometimes a little danger, sometimes a lot of danger. But it isn't of an intentional hunted sort of danger. More of a being in the wrong place at the wrong time danger. They stumble almost on the trolls. (They also stumble upon the meeting place of the wolves or wargs.) And they face danger from rock slides and bad storms--but this is a natural threat. And yes, the stone giants exist but not so absurdly as in the movie:


There they were sheltering under a hanging rock for the night, and he lay beneath a blanket and shook from head to toe. When he peeped out in the lightning-flashes, he saw that across the valley the stone-giants were out, and were hurling rocks at one another for a game, and catching them, and tossing them down into the darkness where they smashed among the trees far below, or splintered into little bits with a bang. Then came a wind and a rain, and the wind whipped the rain and the hail about in every direction, so that an overhanging rock was no protection at all. Soon they were getting drenched and their ponies were standing with their heads down and their tails between their legs, and some of them were whinnying with fright. They could hear the giants guffawing and shouting all over the mountainsides.
"This won't do at all!" said Thorin. "If we don't get blown off, or drowned, or struck by lightning, we shall be picked up by some giant and kicked sky-high for a football."
"Well, if you know of anywhere better, take us there!" said Gandalf, who was feeling very grumpy, and was far from happy about the giants himself. (104)

The book doesn't exactly stay focused on the danger in any particularly threatening situation. The focus is on the adventure, the quest, the journey. There are plenty of in-between moments in the book. Moments where they might not be physically in danger from an enemy (goblins, trolls, angry elves, giant spiders), but might be facing discouragement, doubt, depression. Not to mention hunger, thirst, and exhaustion!!!

There were isolated scenes that were especially faithful to the book and lovely to watch! But there were plenty of scenes that were pure interpretation. For better or worse. The film shows that there is more than one way to "read" a book or story.

Reading The Annotated Hobbit was beneficial. It reminded me of the creative process involved in writing and storytelling. Reading the annotations showed me that Tolkien never stopped creating this story. It was NOT "the end" of the story when it was published in 1937. The story kept changing and transforming and evolving through the decades. Tolkien stayed involved in the story. If Tolkien himself kept changing the story as his fantasy world kept growing and expanding, then it only makes sense that the film would be free to do the same.

I personally enjoyed reading almost all of the annotations. Some notes are mainly textual revision notes, letting readers know the differences between the different editions of the text (1937, 1951, 1966, etc.) Other notes tend to be scholarly and focused on literature. But some provide insights on The Hobbit or Middle Earth. (I liked notes about authors that influenced Tolkien.)

That's one awesome looking book. We read The Hobbit to our youngest daughter this spring, after watching the movie this winter. We were struck by the contrast and similarity as well!

The annotated edition is my favorite too for the same reasons. For some reason though, I have yet to actually complete reading it.