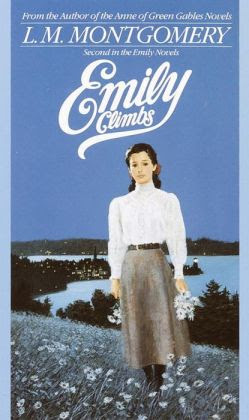 Emily Climbs is the sequel to Emily of New Moon. Emily Starr, our heroine, is around fourteen when the novel opens. She is preparing to go to high school in Shrewsbury with her friends Ilse, Teddy, and Perry. (It does take some persuading for Teddy's mother to let him go. And Aunt Elizabeth is perhaps coaxed into it by Emily's other aunts and uncles who want their niece to further her education.) While attending high school, Emily will live with her Aunt Ruth. (And Emily thought Aunt Elizabeth was difficult to get along with, difficult to please!) Emily also struggles with her promise to her aunt: while living with her Aunt Ruth, she will not write fictional stories. She still manages to fit in character sketches of real people, poems, etc.

Emily is growing up; gone are Emily's dear letters to her father. Instead Emily is perfecting her craft, giving all to pursuing her dream of becoming a REAL writer, a professional. Writing is her everything. She's spirited and ambitious.

In some ways, L.M. Montgomery rushed through Anne's life. The first novel, Anne of Green Gables, covers at least five or six years. Time is spent getting to know Anne at the very beginning and at the very end. But the growing years--the high school years, the years at Queens--are missing in a way. Readers learn very little about Anne's daily life for most of those teen years. That is not the case with Emily. In both Emily of New Moon and Emily Climbs, readers get to know Emily very well. More time is spent on the little things, the daily things, the ordinary experiences of childhood. More time is given to establishing her characters. I think the differences between the Anne books and the Emily books reflect Montgomery's growth and maturity as a writer.

L.M. Montgomery is one of the best writers. I love, love, love her writing. I love her characterization. She is one of the absolute best writers when it comes to characterization. And she even accomplishes this in her short stories! In just a few short sentences, Montgomery makes her characters come to life. She gives substance! I love her descriptions. I love her storytelling. One of the most delightful sections in Emily Climbs is when Emily learns the story of the woman who spanked the King! This story inspires Emily to write it down, and it is one of her first publications!

Have you read the Emily books?


Oh, if I could only put things into words as I see them! Mr. Carpenter says, 'Strive--strive--keep on--words are your medium--make them your slaves--until they will say for you what you want them to say.' That is true--and I do try--but it seems to me there is something beyond words--any words--all words--something that always escapes you when you try to grasp it--and yet leaves something in your hand which you wouldn't have had if you hadn't reached for it. (10)

Books are not written about proper children. They would be so dull nobody would read them. (14)

Arminius Scobie is a very mean man and always buys his wife's hats for her, lest she pay too much for them. They know this in the Shrewsbury stores, and laugh at him. One day last week he was in Jones and McCallum's, buying her a hat, and Mr. Jones told him that if he would wear the hat from the store to the station he would let him have it for nothing. Arminius did. It was a quarter of a mile to the station and all the small boys in Shrewsbury ran after him and hooted him. But Arminius didn't care. He had saved three dollars and forty-nine cents. (24-5)

I have been reading three books Dean lent me this week. One was like a rose garden--very pleasant, but just a little too sweet. And one was like a pine wood on a mountain--full of balsam and tang--I loved it, and yet it filled me with a sort of despair. It was written so beautifully--I can never write like that, I feel sure. And one--it was just like a pig-sty. Dean gave me that one by mistake. (29)

"Emily," whispered Teddy, "you're the sweetest girl in the world." The words have been said so often by so many millions of lads to so many millions of lasses, that they ought to be worn to tatters. But when you hear them for the first time, in some magic hour of your teens, they are as new and fresh and wondrous  as if they had just drifted over the hedges of Eden. (54)

Well, it all comes to this, there's no use trying to live in other people's opinions. The only thing to do is to live in your own. (76)

No one can be free who has a thousand ancestors. (84)

"Nothing good about this but it's title. A priggish little yarn. And Hidden Riches is not a story--it's a machine. It creaks. It never made me forget for one instant that it was a story. Hence it isn't a story. (91)

"There isn't any such thing as ordinary life," said Emily. Mr. Carpenter looked at her for a moment. "You're right--there isn't," he said slowly. "But one wonders a little how you know it." (92)

Houses are like people--some you like and some you don't like--and once in a while there is one you love. (101)

"The boys like me as a pal but I don't believe anyone will ever really fall in love with me."
"Nonsense," said Emily reassuringly. "Nine out of ten men will fall in love with you."
"But it will be the tenth I'll want," persisted Ilse gloomily. (176)

Andrew is going to be one of my problems. Dean thinks it's great fun--he knows what is in the wind as well as I do. He is always teasing me about my red-headed young man--my r.h.y.m. for short.
"He's almost a rhyme," said Dean.
"But never a poem," said I. (219)

I read a story tonight. It ended unhappily. I was wretched until I had invented a happy ending for it. I shall always end my stories happily. I don't care whether it's 'true to life' or not. It's true to life as it should be and that's a better truth than the other. (223)

Mr. Carpenter sneered at my 'liking for slops' and told me to go and read the Elsie books! (253)

I think it's great that people are still reviewing older books. Not only do I find the language of older books more beautiful, I find that they can turn characters living ordinary lives into something interesting.

Awesome book! Emily Climbs is one of my alltime favorites. I still read and reread it every few years. Thanks for reviewing it!