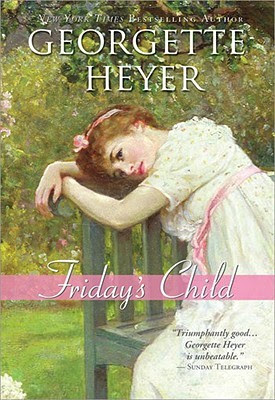 When we first meet Lord Sherington* he is proposing to Miss Isabella Milborne. He marries a few chapters later, but, his wife is NOT Miss Milborne. After a brutal rejection, he decides to marry the first woman he sees. He happens across an old friend from childhood days, a Miss Hero Wantage. She is much younger than he is--just seventeen! But she's willing, more than willing, to be his wife. How did these two happen to meet? Well, she's running away from home! So Sherry and Hero set off together to London to arrange their marriage. He settles her into a hotel room, and, then begins to go about the necessary details of arranging a super-quick wedding!

Sherry wanted to marry so he could inherit now instead of later. At first he thinks his marriage won't really change anything at all in his daily life. But, of course, he was mistaken! Hero is completely clueless about how a proper young wife should behave, what things are socially acceptable and socially encouraged, and what things are NOT to be done. Hero absorbs everything, she's very observant but not exactly discerning. She's impulsive too! So if she wants to try something, she does!

Hero's closest friends are her husband's closest friends: Gil, Ferdy, and George. And they all adore "Kitten." In fact, sometimes they understand her better than her own husband. They are quicker to perceive things! They can "read" her better and sometimes they interfere in the marriage to help things run smoother. They often explain things to Sherry in such a way that he finally gets it. Sherry, however, feels that they interfere too much!

While Hero is aware of her feelings for Sherry, will her husband ever realize how he truly feels about his young wife?!

I enjoyed Friday's Child. It is not my absolute favorite Georgette Heyer regency, but, it is quite enjoyable!!!

*Throughout the novel, he's simply "Viscount" or "Sherry"  or "Anthony"