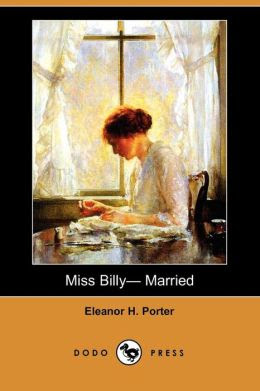 Miss Billy Married is the conclusion to Eleanor H. Porter's Miss Billy trilogy. The first novel was Miss Billy and the second was Miss Billy's Decision. The first two Miss Billy novels were published before the oh-so-successful publication of the children's novel, Pollyanna in 1913. (Other popular authors of the time were Jean Webster, L.M. Montgomery, and Grace Livingston Hill.)

Billy has married Bertram Henshaw, and the two are living with brother William. (The other brother, Cyril, has moved with his wife, into a home of their own.) If Billy, our heroine, has a weakness, that weakness would definitely be thinking too much and making things more complicated than they need to be. (Though one could argue that she doesn't think enough in some places!) For example, Billy will read an article--or to be precise a quiz--in a magazine and become obsessed with it, obsessed with analyzing herself, analyzing her husband, analyzing her marriage, etc. And you can just imagine what Billy does with self-help books, cook books, and parenting books! The truth is that Billy is completely silly and ridiculous as a heroine. The book, for better or worse, is enjoyable--or entertaining--because it is comical. The laughs coming at Billy's expense for the most part. Is this a terrible thing? Has Billy lost some of her intelligence since getting married? After all, in the first two books, Miss Billy was managing just fine! She was composing music and having it published! She was popular, successful, and generous. She was absorbed in her music OR she was absorbed in her friends, making their lives better, making a contribution to society. Readers are presented with a whole new Billy in this one. Billy is facing her toughest trials: learning to manage without hired live-in servants, learning to cook and bake, learning to clean, learning when to make her husband, her "everything, and when to give him some space, learning to mother, learning that reading twenty conflicting parenting books is ridiculous, etc.

Example of the humor:

Interesting to note that food fads are nothing new!