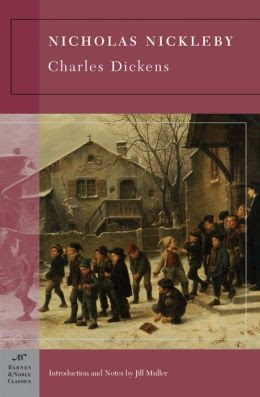 I definitely enjoyed reading Charles Dickens' The Life and Adventures of Nicholas Nickleby. Soon after the novel opens, three members of the Nickleby family (Mrs. Nickleby, Nicholas, and Kate) travel to London to visit with Ralph Nickleby (Nicholas and Kate's uncle.) Mr. Nickleby has recently died leaving the family destitute. While they don't demand financial support from the relatively wealthy uncle, they are certainly hopeful that he will at the very least help Nicholas and Kate find positions to earn money.

One thing can be said with certainty: Ralph Nickleby is not a nice man, a kind man, a sociable man. I am not sure he treats anyone with respect or consideration. Emotional support will not be given, nor will direct financial help. He "helps" Nicholas get a job in a family-run school. The owner of the "school" is a scoundrel through and through. He also "helps" Kate get a job as an assistant seamstress. Neither job lasts terribly long. Kate loses her job when the seamstress goes bankrupt; Nicholas runs away from his job--taking along a young man named Smike--after beating up his employer. Any other "help" given to Kate is the opposite of what anyone could ever want. He introduces her to several despicable gentleman-in-name-only men, notably Sir Mulberry Hawk and Lord Frederick Verisopht. Kate finds their attentions repulsive and threatening, to a degree. Mr. Pluck and Mr Pyke are "friends" who help the two gentleman get in closer with the mother and daughter. The mother. OH WHAT I COULD SAY ABOUT HER!!!! Needless to say, the attentions from these two men cause her to lose a second job, a job I believe she found on her own. And Kate believes the danger to be real, as does Newman Noggs; he takes it upon himself to write Nicholas and alert him to the situation, bringing him back to London and reuniting the family for better or worse. (After Nicholas left his first job, he becomes an actor in a theatrical troupe!!!)

Most of the novel concerns the welfare of the Nickleby family as they try to make a life for themselves. Kate and Nicholas just want opportunities to work, to prove themselves capable workers. Mrs. Nickleby, well, she's just looking for someone--anyone--to talk at. They meet plenty of people--some good, some bad. Dickens novel has an extremely large cast of characters, and, yet the stories come together for the most part and a pleasant end is achieved. Nicholas Nickleby is not a romance like Our Mutual Friend. Other Dickens' novels have more romance (David Copperfield, Our Mutual Friend, Little Dorrit, Bleak House), but it is a thoroughly enjoyable novel. I enjoyed spending time with the characters. Some of my favorite "minor" characters were Charles and Ned Cheeryble, Tim Linkinwater, Miss La Creevy, and Mr. Lillyvick. Little details can bring delight. For example, the talk of the "United Metropolitan Improved Hot Muffin and Crumpet Baking and Punctual Delivery Company."


To die is our heavy portion, but, oh, let us die with life about us; when our cold hearts cease to beat, let warm hearts be beating near; let our last look be upon the bounds which God has set to his own bright skies, and not on stone walls and bars of iron!

'There are shades in all good pictures, but there are lights too, if we choose to contemplate them,' said the gentleman with the merry face.

'The sun does not shine upon this fair earth to meet frowning eyes, depend upon it.'

'When a man's a bear, he is generally pretty independent.'
'His manner is rough,' said Kate.
'Rough!' cried Miss La Creevy, 'a porcupine's a featherbed to him! I never met with such a cross-grained old savage.'

Spite is a little word; but it represents as strange a jumble of feelings, and compound of discords, as any polysyllable in the language.

Dreams are the bright creatures of poem and legend, who sport on earth in the night season, and melt away in the first beam of the sun, which lights grim care and stern reality on their daily pilgrimage through the world.

The plot was most interesting. It belonged to no particular age, people, or country, and was perhaps the more delightful on that account, as nobody's previous information could afford the remotest glimmering of what would ever come of it.

Newman stopped; not at all disconcerted.
'I did ring.'
'I knew you did.'
'Then why do you offer to go if you know that?'
'I thought you rang to say you didn't ring,' replied Newman. 'You often do.'

I've avoided this book because it sounds so depressing. Loved your quotes though!