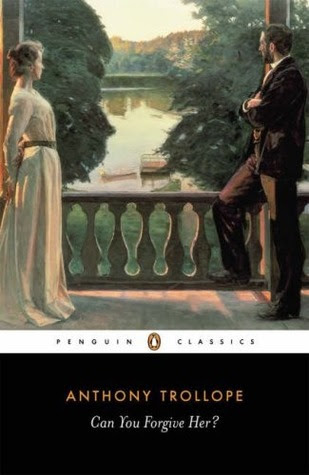 I adore Anthony Trollope. I do. I just love, love, love him. Can You Forgive Her? is the first novel in the Palliser series. There are multiple stories to follow in this one; one or two of the stories are political in nature, the rest of the stories are more focused on relationships (family, friendship, romantic love).

Alice Vavasor might arguably be the main heroine of Can You Forgive Her? She is a young woman contemplating marriage. She contemplates a lot. When readers first meet her, we learn that her first fiancee was her cousin, George Vavasor; that first engagement was broken when she discovered he was unfaithful. At the start of the novel, she is engaged for a second time. Her second fiancee is John Grey. He is eager to marry; she is not.

Kate Vavasor is Alice's cousin and best friend. At the start of the novel, Kate is plotting to get Alice back together with George. Kate thinks her brother, George, is the best hope for her brother's future happiness. She is more than a little selfish and manipulative.

Readers first get the chance to know George when the three go to Europe together on vacation. He is acting chaperon for Alice and Kate. He shares some pleasant times with Alice, and these somewhat private moments give him hope that this wealthy heiress will jilt John Grey and marry him instead. He really, really wants her money and he feels that he could tolerate being married if it was to Alice. George is possibly the most selfish character in the whole novel.

John Grey had his doubts about allowing Alice to go on a trip with her cousins, but, there was little he could do about it. Since Alice's return, she's been more distant than ever. Is Alice having second thoughts, and will he allow her to have those second thoughts? Does John know best in this situation? Alice's father certainly is hopeful that Alice and John will go ahead and marry! As are the rest of Alice's relations.

While Kate spends time with her oh-so-rich widowed aunt, Arabella Greenow, Alice goes visiting some as well. She visits with the newly married couple Lady Glencora (M'Cluskie) and Plantagenet Palliser. She got a chance to know her a little bit while Lady Glencora was courting another man, Burgo Fitzgerald. But now she's getting to know her a lot better. In fact, Lady Glencora is always sharing her most personal thoughts with her! Little things like she's not in love with her husband, that she still thinks of Burgo all-too-often, that she is even contemplating running away with him! Alice is practical and moral.

Can You Forgive Her? has two WONDERFUL heroes. I really, really, really LOVED Plantagenet Palliser and John Grey. It is not just that these two know just what to say in any given situation; it is that their words are well-matched with their actions. They know how to SHOW love. In the opening chapters, I wasn't sure how I was supposed to feel about John Grey. Alice was so doubtful of her readiness to get married to him. Though Alice said she truly loved him, Alice's doubt confused me. And John seemed oh-so-certain that he knew Alice best. I wasn't sure if that was so. It seemed so arrogant, in a way! Readers don't really get a chance to know Plantagenet Palliser until the second half of the novel. And his character wowed me in a way.

Can You Forgive Her? shows three women facing major life decisions. Arabella Greenow, a widow, has to decide IF she wants to remarry. There are two men eager--desperate--to "win" her: Mr. Cheesacre and Captain Bellfield. Lady Glencora is married, true, but she feels that was something her family forced upon her. She's contemplating making her own choice: to go with her love, Burgo, and face the displeasure of society OR stay with her husband whom she barely knows. Alice is trying to decide IF she wants to get married. There are two men in her life as well, John Grey and George Vavasor.


In this world things are beautiful only because they are not quite seen, or not perfectly understood. Poetry is precious chiefly because it suggests more than it declares.

Babbling may be a weakness, but to my thinking mystery is a vice.

A man can't govern well, simply because he is genuinely anxious that men should be well governed.

Every man to himself is the centre of the whole world;--the axle on which it all turns. All knowledge is but his own perception of the things around him. All love, and care for others, and solicitude for the world's welfare, are but his own feelings as to the world's wants and the world's merits.

The schoolboy, when he sits down to make his rhymes, dares not say, even to his sister, that he hopes to rival Milton; but he nurses such a hope. The preacher, when he preaches his sermon, does not whisper, even to his wife, his belief that thousands may perhaps be turned to repentance by the strength of his words; but he thinks that the thousand converts are possible.

Grief taken up because grief is supposed to be proper, is only one degree better than pretended grief.

If a cook can't make soup between two and seven, she can't make it in a week.

My belief is that a girl can have anything forgiven her, if she'll only tell it herself.

Men and women ain't lumps of sugar. They don't melt because the water is sometimes warm.

There are men whose energies hardly ever carry them beyond looking for the thing they want.

It seems to me that if a man can so train himself that he may live honestly and die fearlessly, he has done about as much as is necessary.

Romance, if it is to come at all, should always come by fits and starts.

I remember reading some of his books years ago, but especially enjoyed the television series The Pallisers.
Ann

Yes this book has some wonderful men in it. I enjoyed reading the whole series and seeing how Lady Glencora develops.