My Year with Jane: Mansfield Park 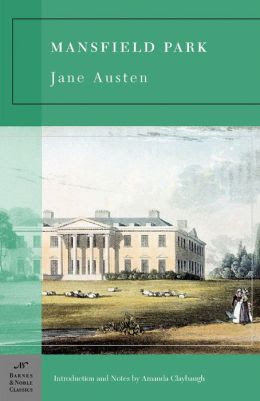 I have read Mansfield Park three times. The first time I found myself frustrated and bored. Where was the romance? Where was the satisfaction? Who was supposed to be THE HERO?! Was it really supposed to be Edmund?! The second time I read it, I found myself entertained. I also found myself falling for the wrong hero, Henry Crawford and asking plenty of what might have been questions. The third time it was a joy to revisit. This isn't the first time that it has taken multiple readings to enjoy and appreciate and love an Austen novel. I haven't decided what this means exactly. If it is a good thing that Austen's novels are layered and complex and take some time to absorb, or, if it's a weakness. If you don't exactly "enjoy" something the first time, what is there to make you want to go back and read it again and again? I think Pride and Prejudice is the one big exception to the rule. Also perhaps Persuasion.

Fanny Price is the heroine of Mansfield Park. She is intelligent, observant, selfless, and considerate. Part of this is her upbringing, she's been brought up to put everyone else's wants and needs and whims ahead of her own. Part of this is just her nature, in my opinion. She treats everyone with kindness and respect regardless of whether they "deserve" it or not.


It would be delightful to feel myself of consequence to anybody.

Fanny, being always a very courteous listener, and often the only listener at hand, came in for the complaints and the distresses of most of them.

Edmund Bertram is Fanny's cousin. He will be a minister. He falls madly in love (if it is truly love and not lust) with Mary Crawford. For almost the entire novel, he talks on and on and on and on about Mary to poor Fanny. He can at any given time give you a top ten list on why Mary is completely wrong for him and why it would never work out in the end. But she is the ONLY WOMAN IN THE WORLD HE COULD EVER LOVE. Of course, Fanny is in love with Edmund. Fanny's patience in listening to Edmund alone would make her worthy of being a saint.


I cannot give her up, Fanny. She is the only woman in the world whom I could ever think of as a wife. If I did not believe that she had some regard for me, of course I should not say this, but I do believe it.

Mary Crawford is Fanny's opposite in many, many ways. She doesn't know how to be serious. She talks way too much. She shares way too much. She's rude and inconsiderate. And her first love, her forever love, will always be herself.


Selfishness must always be forgiven, you know, because there is no hope of a cure.

Henry Crawford is Mary's brother. He is Fanny's opposite too. He has a very high opinion of himself. And he finds nothing so satisfying as making women fall in love with him. He loves being loved and adored. He determines at one point that it would be SOMETHING to have Fanny fall in love with him. He knows it will be the most difficult challenge he's faced so far. She's no fool. In the attempting, it is Henry who falls hard. He finds himself for the first time actually caring and loving someone else. Or does he? Austen is a bit ambiguous how far his reform goes.


I never was so long in company with a girl in my life, trying to entertain her, and succeed so ill! Never met with a girl who looked so grave on me! I must try to get the better of this. Her looks say, ‘I will not like you, I am determined not to like you’; and I say she shall.

They will now see what sort of woman it is that can attach me, that can attach a man of sense. I wish the discovery may do them any good. And they will now see their cousin treated as she ought to be, and I wish they may be heartily ashamed of their own abominable neglect and unkindness. They will be angry,” he added, after a moment’s silence, and in a cooler tone; “Mrs. Rushworth will be very angry. It will be a bitter pill to her; that is, like other bitter pills, it will have two moments’ ill flavour, and then be swallowed and forgotten; for I am not such a coxcomb as to suppose her feelings more lasting than other women’s, though I was the object of them. Yes, Mary, my Fanny will feel a difference indeed: a daily, hourly difference, in the behaviour of every being who approaches her; and it will be the completion of my happiness to know that I am the doer of it, that I am the person to give the consequence so justly her due.
Now she is dependent, helpless, friendless, neglected, forgotten.” “Nay, Henry, not by all; not forgotten by all; not friendless or forgotten. Her cousin Edmund never forgets her.” “Edmund! True, I believe he is, generally speaking, kind to her, and so is Sir Thomas in his way; but it is the way of a rich, superior, long-worded, arbitrary uncle. What can Sir Thomas and Edmund together do, what do they do for her happiness, comfort, honour, and dignity in the world, to what I shall do?”

Mansfield Park is without a doubt one of the messier Austen novels. Messy isn't the perfect word, I know. The characters of Mansfield Park are so messed up, so in need of fixing. Readers never know exactly why Fanny loves Edmund with all her heart and soul. Readers just have to take Fanny's love on faith, believing that she knows best, that she knows her heart better than we do, and, that Edmund BEFORE Mary was worth loving. Austen's ending is far from romantic in that the romance between Fanny and Edmund is not developed on the page.

I can easily imagine Fanny in these words:

You give your hand to me
And then you say, "Hello."
And I can hardly speak,
My heart is beating so.
And anyone can tell
You think you know me well.
Well, you don't know me.

And with a big, big stretch, maybe Edmund in these words:

The first is "You Don't Know Me" and the second is "For The First Time."

I will have to reread Jane Austen simply because I can't remember...Plus, I haven't read every one. Have not read Mansfield Park. Enjoyed your quotes from the book.

I just finished a reread of MP myself, though this time I didn't enjoy it as much as I have in the past. You are right, it is a messy book--messy people with messy problems, that never really get resolved. It is an unsettling novel, but then, life can be unsettling and Austen's genius is in capturing that so well.

There is never a lack of things to talk about when MP is the topic.

I so agree with you. It's the sort of book that can give you a fresh opinion each time you re-read it.