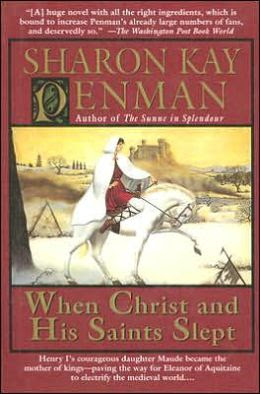 I've been meaning to read more of Sharon Kay Penman's work for years now. When Christ and His Saints Slept is set in the twelfth century. It begins with the tragic sailing of The White Ship and ends with Henry II ready to be crowned king of England. For readers who like numbers, that would be 1120-1154. It covers the later part of Henry I's reign: his grief and desperation over the loss of his son and heir, his wanting his daughter, Maude, to be his successor; it covers the war--which lasted over ten years--between Stephen and Maude for the crown of England. Readers also get a chance to see Maude's son, Henry, grow up to become "Henry II."

It is a novel with many strengths. One of its greatest strengths, perhaps, is in the wide range of characters or narrators. Stephen and Matilda, on one side, Maude and Geoffrey, on the other. Readers meet the men (and women) who supported Maude, including many of Henry I's illegitimate sons. Readers meet the men (and women) who supported Stephen's claim to the throne. If there is a point to When Christ and His Saints Slept, it is this: war is ugly and cruel and pointless. Readers see Stephen and his supporters--his army--do horribly cruel things in the name of war. Readers see Maude's army do some equally horrid things. One side is not holier than the other. While neither army was as cruel as they possibly could be all the time, without ceasing, year after year, the truth was that England suffered greatly during this tug of war. The truth was very few cared WHO ruled England, so long as England was ruled peaceably and practically. The burning. The stealing and looting. The raping. The killing. The holding of hostages. England was in a BIG BIG mess if this was the best either side could manage.

If the novel has one hero, one "main" character, it would be Ranulf. Ranulf is a fictional illegitimate son of Henry I. It is not a stretch to fit him in historically since Henry I recognized over twenty such sons! Ranulf along with Robert and Gilbert and Miles and Brien, and countless others supported Maude and her claim to the throne. While the novel does focus on the battles, the war, the political mess--it also gives a personal side to the time period. Readers see Ranulf grow up a bit, fall in love, make mistakes, find true love, and settle down to marry and raise his own family.

I loved how many characters we get to meet and know. I loved that we get to know men AND women from the time period, most of them historical figures, though not all. I loved that readers get introduced to real history. Penman's pacing was wonderful, I felt!

For readers who ENJOY history, When Christ and His Saints Slept is easy to recommend. She gives you enough context so that you're not lost (or at least not lost past all hope!) but it never weighed the text down in my opinion. I admit that "being lost" in a history book is all a subjective matter based on what one does or doesn't know heading into a book, but, I thought she did a good balancing job.


And so began for the wretched people of England, a time of suffering so great that they came to fear "Christ and his saints slept." (171)

If ever there was a woman unable to learn from her mistakes, it was this one for certes. No more than Stephen could. If the Lord God plucked him out of his Bristol prison on the morrow and restored him to power at Westminster, nothing would change. He'd still go on forgiving men he ought to hang, promising more than he could deliver, failing to keep the King's Peace. Maude and Stephen, a match made in Hell. What was it Geoffrey de Mandeville had once said--a lifetime ago? Ah, yes, that Maude would listen to no one and Stephen to anyone. Had there ever, he wondered, been a war like this? Was there a single soul--not related to them by blood or marriage--who truly wanted to see either one of them on England's throne? (281)

"I am truly glad to have you safe, Robert. But tonight I feel as if... as if we'd struggled and panted and clawed our way up a mountain, only to stumble just as we neared the summit and fall all the way down, landing in a bloodied, bruised heap at the bottom. What in God's Name do we do now?"
"I suppose," he said, "we start climbing again."
"How many of our men will have the heart for it?" Rising, she began to pace, "To come so close and then to have it all snatched away like this...it is so unfair, Robert, so damnably unfair!"
"Life is unfair," he said, sounding so stoical, so rational, and so dispassionate that she was suddenly angry, a scalding, seething, impotent rage that spared no one--not herself, not Robert, not God.
"You think I don't know that? When has life ever been fair to women? Just think upon how easy it was for Stephen to steal my crown, and how bitter and bloody has been my struggle to win it back. Even after we'd caged Stephen at Bristol Castle, he was still a rival, still a threat...and why? Because he was so much braver or more clever or capable than me? No...because I was a woman, for it always came back to that. I'll not deny that I made mistakes, but you do not know what it is like, Robert, to be judged so unfairly, to be rejected not for what you've done but for what you are. It is a poison that seeps into the soul, that makes you half crazed with the need to prove yourself..."
She stopped to catch her breath, and only then did she see the look on Robert's face, one of disbelief and then utter and overwhelming fury, burning as hot as her own anger, hotter even, for being so long suppressed.
"I do not know what it is like?" he said incredulously. "I was our father's firstborn son, but was I his heir? No, I was just his bastard. He trusted me and relied upon me and needed me. But none of that mattered, not even after the White Ship sank and he lost his only lawfully begotten son. He was so desperate to have an heir of his body that he dragged you back--unwilling--from Germany, forced you into a marriage that he knew was doomed, and then risked rebellion by ramming you down the throats of his barons. And all the while, he had a son capable of ruling after him--he had me! But I was the son born of his sin, so I was not worthy to be king. As if I could have blundered any worse than you or Stephen!"Maude was stunned. She stared at him, too stricken for words, not knowing what to say even if she'd been capable of speech. Robert seemed equally shattered by his outburst: his face was suddenly ashen. He started to speak, then turned abruptly and walked out. (343-44).

What a wonderful review! Penman's book sounds well worth reading.

I really need to read more Penman, too!

This is on my reading list for this year and I cannot wait, especially after reading your review. Penman is one of my favorite historical writers, which is good because she has a lot of books, most of which I haven't read yet.

Interesting about Ranulf being the hero. I'm fascinated by HII and Eleanor, so his story should be fun to read too.

The story of the White Ship is just so sad. I only learned about it last year while I was reading another book, and was really struck by its story.