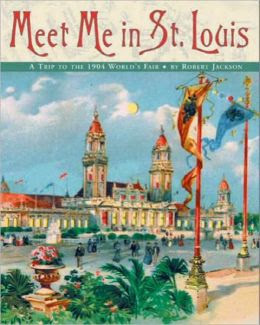 Meet Me in St. Louis is a fascinating book about the 1904 World's Fair. I found this nonfiction book for young readers to be entertaining and wonderful from cover to cover. It was well-organized. The narration was great--never a dull moment. It was detailed. If you love discovering "I didn't know that?!" facts, this is one to treasure. I found myself wanting to find people to enlighten. I learned so much from reading it.

Chapter one is a direct appeal to readers. Jackson writes in second person. He wants YOU to join him at the fair. This chapter gives a brief overview of the fair, inviting you to "experience" it through your five senses.


"The giant wheel lurches into motion; you hold your breath and feel yourself moving. How is it possible for such a large car, stuffed to the gills with sixty people, to rise into the air like this? You bravely take a first peek out the windows. Off to the near right, you spot the Abraham Lincoln Exhibit, which houses the actual log cabin where Lincoln lived as a child in Kentucky. Then the rolling gardens and peaceful ponds of the Japanese Pavilion opens up in front of you. A bit higher and you can see all of the Jerusalem Exhibit, a miniature version of that Middle Eastern city filled with replicas of ancient buildings. Can this be St. Louis, or have you been transported to a whole new world?" (10)

Chapter six is a great for capturing the unique entertainments. It focuses on "the Illusions on the Pike." Jackson writes,


"Plays, concerts, circus tricks--more than forty different shows were staged in all, some in theaters and others right in the center of the wide walkway. Fifteen hundred animals, from zebras to polar bears, lived on the Pike during the fair, and many of them were entertaining performers too. Without a doubt, the Pike was the loudest area on the fairgrounds. Dozens of men called "spielers" or "barkers" shouted into megaphones for hours, trying to attract people to rides and shows." (73) This chapter also mentions Geronimo. "He signed autographs for ten cents each; depending on his mood, the price for his photograph ranged between fifty cents and two dollars. Geronimo would even sell his hat for the wildly expensive price of five dollars--then coolly pull a new one from under the table, place it on his head, and wait for another buyer." (83)

Chapter seven focuses on the debut of the Ferris Wheel, or "Observation Wheel."

Chapter eight is titled, "Faces of the Fair." I thought this was a well done chapter that examines, with honesty, the diversity of the Fair; in many places, it addresses racism and exploitation. The fair, as we've read so far, may have been educational, and it may have been FUN, but, it wasn't always fair and just.


"While blacks were not the only minority group treated with disrespect, at least they were free to boycott the fair if they wanted. Others were not able to protest. Several ethnic groups had been brought from their homelands to St. Louis--in some cases by force. Men, women, and children were put on display so that fairgoers could take a first-hand look at them and, in theory, learn about their cultures. The largest of these "anthropological" exhibits came from the Philippines. Hundreds of exploited Filipinos lived on the fairgrounds in open huts and flimsy thatched cabins. Cramped and filthy, the housing offered almost no privacy. The Filipinos were forced by fair managers to sit quietly while crowds of curious visitors gawked at them; they were also told to sing, dance, and perform other activities against their will. Instead of learning about the Filipinos and gaining respect for this culture, most fairgoers concluded they were a primitive race of inferior beings." (100)

And later from the same chapter,


"Some people were disturbed by the exploitation of ethnic groups, including a magazine reporter named Laura Ingalls Wilder. Long before the Little House on the Prairie books made her a well-known children's author, she traveled from her home in southern Missouri to write about the fair. Wilder enjoyed the palaces, foreign buildings, and the Pike, but she was appalled by the mistreatment of many of the foreign and Native American people. She reportedly even tried to stop exhibitors from forcing them on display. One day, a young man from Africa was being exploited during a typically cruel stage show. Wilder stood up in the middle of the audience and demanded that the show stop immediately." (103-4)

Chapter nine is about "special events." The chapter covers many such events. But the BEST, BEST, BEST part of this chapter is devoted to the 1904 Olympic Games in St. Louis!!! There were a dozen little things that I found fascinating in this section. At least a dozen!


"Because the Games were fairly new--and therefore disorganized--many bizarre and amusing things happened. After a disagreement over who won the fifty-meter race, two swimmers got into a brawl and just agreed to race again. There was no such thing as instant replay in 1904, of course. And American gymnast George Eyser ambled off with five medals, including two golds, after competing with a wooden leg. He had lost one leg after being run over by a train years earlier." (114)


"A pair of Zulu tribesmen, Len Taunyane and Jan Mashiani, became the first African athletes to compete in the Olympics, even though they were supposed to be part of the Boer War Exhibit. Taunyane might have won, but a fierce dog chased him nearly a mile off course, and he finished in ninth place." (116)

Chapter ten focuses on the last days of the fair.

I would definitely recommend this one!!