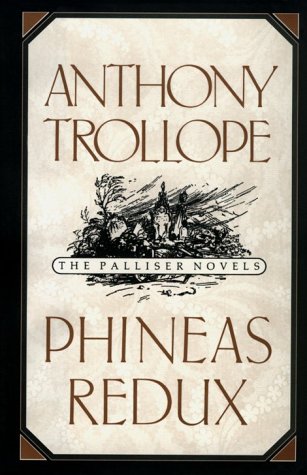 Phineas Redux is the fourth in the Palliser series by Anthony Trollope. Previous titles include Can You Forgive Her?, Phineas Finn, and The Eustace Diamonds.

It has been a few years since Phineas Finn left the joys and sorrows of political life to settle down and marry. (For the record, he didn't really have much of a choice in giving up the politics). But now his luck, for better or worse, is changing. His wife has conveniently died, and there is a new opportunity for him to run for a seat in parliament. He's hesitant but as always ambitious. He leaps for it knowing that he could easily regret it.

It has also been a few years since Lady Laura has left her husband, Robert Kennedy, whom she detests. She is still very obsessed with Phineas Finn. She loves him dearly, she makes him--in her own mind--her everything. Phineas Finn, on the other hand, remembers her kindly but rarely. She is NOT his everything: she hasn't been since she turned down his proposal all those years again. He would never--could never--think of her like that again. He respects her, but, he's content to keep his distance. Her confessions to him are improper, in a way, and prove embarrassing to him.

Lady Laura is not the only woman who has given away her heart to Phineas. Madame Max Goesler still loves him though she's at least discreet or more discreet. At the very least, she has a life outside her daydreams; her social life is active and she has many good friends. She's not as isolated, so, her love for Phineas perhaps does not come across as obsession.

While I was indifferent to Madame Max in Phineas Finn, I grew to really like her in Phineas Redux. Other female characters I enjoyed were Lady Chiltern (whom we first met in Phineas Finn as Violet Effingham), Lady Glencora (whom we first met in Can We Forgive Her?), and Lizzie Eustace (whom we first met in Eustace Diamonds). It was interesting to me to see which heroines Trollope allowed a happily ever after. I was so very pleased to see Lord and Lady Chiltern settling down quite happily. It was LOVELY to spend time with both of them. I still adore Lady Glenora and Plantagenet Palliser together. Lizzie reaps what she sows, but is fortunate in many ways!

There was a new romance introduced in Phineas Redux. Two men are in love with Adelaide Palliser: Gerard Maule and Thomas Platter Spooner. Adelaide, of course, has her favorite. But the other is very persistent.

In terms of plot: A MURDER. A politician is murdered. There are two suspects. One suspect is Phineas Finn. He is put on trial for the crime...but the evidence is all circumstantial. Will he be convicted? Will doubt and uncertainty of his guilt prevent him from politics in the future?