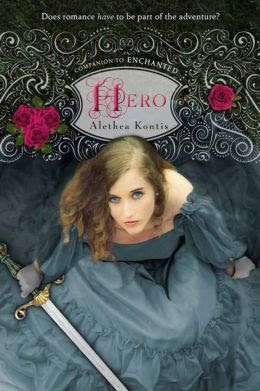 At first, I thought I might have found Hero so very, very confusing because it's been two years since I read Enchanted. And then I reread my review of Enchanted. I found Enchanted just as confusing it seems! So even if I read these two close together, I might not have made sense of this crazy fairy-tale-esque world.

The Woodcutter Family is something, magically, crazily dysfunctional perhaps? Hero stars two of the seven sisters and a brother, Trix. Readers get a glimpse of Thursday (the pirate sibling). But this is not Thursday's tale to tell. This is Saturday's story almost start to finish. But it isn't her story alone. It also belongs to Peregrine. Here is the least confusing part that will still sound confusing:

Peregrine is a boy under enchantment to look like a girl; the witch's daughter is a role he plays and has played for many years. I'm not sure what is enchantment and what is just acting on his part, assuming a disguise that he can put on and take off at will.

Saturday is a girl under enchantment to look like her older brother, Jack. Now how the witch casts the spell to make Saturday look like Jack is beyond me. The spell was intended to bring Jack to her. She wants REVENGE. Jack blinded her.

Somehow Peregrine can see past the enchantment and see the real Saturday. And Saturday learns Peregrine's identity early on as well. I can't remember if she sees the real him, or the enchanted girl. Regardless, these two are destined to fall in love.

They meet, of course, because both are trapped by the oh-so-evil blind witch who can't seem to get her magic to function right. She's just capable enough to be thought a possible risk to life-as-we-know it. But not capable enough that there's a rush to bring her down immediately.

Anyway, the whole book is confusing and messy. It had its moments where I could see why it would be appealing to readers. But it didn't work for me.
© 2014 Becky Laney of Becky's Book Reviews
Posted by Becky at 11:03 AM

I enjoyed a lot of parts of this...but it is pretty confusing and messy too!