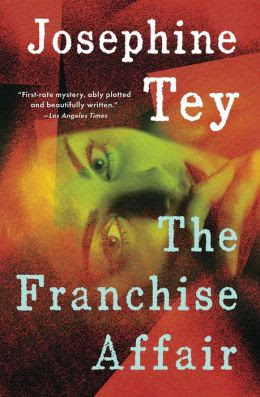 Robert Blair is a lawyer. He lives a boring life; nothing terribly exciting or thrilling ever happens. And. He doesn't seem to mind that his life is mostly predictable. But then one day he receives a call from Marion Sharpe. She is in need of a lawyer; she needs one as soon as possible. Yes, she knows that his firm doesn't specialize in criminal law; yes, she knows he's never handled any case quite like hers before. Yes, she'd be willing to find another lawyer if necessary--if charges are brought against her and if the case were to go to trial. But can he come NOW! He agrees. He rushes to The Francise. He meets Marion and her mother. He meets Inspector Grant. He hears what these two ladies are being accused of. He meets the young woman, Betty Kane, accusing them. He's left a bit speechless. Kane's story: I was waiting for the bus, these two "old" ladies offered me a ride, I accepted, they took me to their home, wouldn't let me leave, locked me in the attic, denied me food unless I worked for them doing some mending, they beat me too! After four weeks I managed to escape! Grant and Blair are speechless as are the women. The story seems weird and unrealistic. Grant's instincts are telling him that the Kane girl is a crazy attention-seeker who is a liar through and through. Blair also thinks the Kane girl is a liar. He also thinks she's immoral. There HAS to be a man involved. Kane had to have met a guy over vacation and run off with him and made up this horrible story when that love affair fell apart. Both Blair and Grant are relying on instincts and making quick judgments. Grant, at the start of the novel, does not want to make a case of this. He does not believe there has been an actual crime.

But. The story will not go away. Kane will tell her story, keep her story alive in the papers. The community will turn against the Sharpe women at the Francise. Things will get uncomfortable and dangerous.

Blair is determined that the best defense is to prove that Betty Kane is a terrible, horrible mess of a girl. She's far from good and honest and respectable. He wants to expose this girl, show her that she can't go around accusing good, honest women like the Sharpes of horrible crimes. She shouldn't be allowed to get away with it.

Grant, Tey's detective, is barely in this one. He is in a few scenes, but, for the most part this is Robert Blair's story, his chance to have an exciting life, to play hero.

The Franchise Affair is not my favorite Tey novel, but, it was a pleasant read.

Hello Friend,
I'm visiting the blogs I follow today to wish my blogger friends a hearty thank you.
The downside to reading/reviewing and blogging is little time to visit the blogs I follow.
Thank you so much for your readership and support over these years.
You are a dear dear friend!